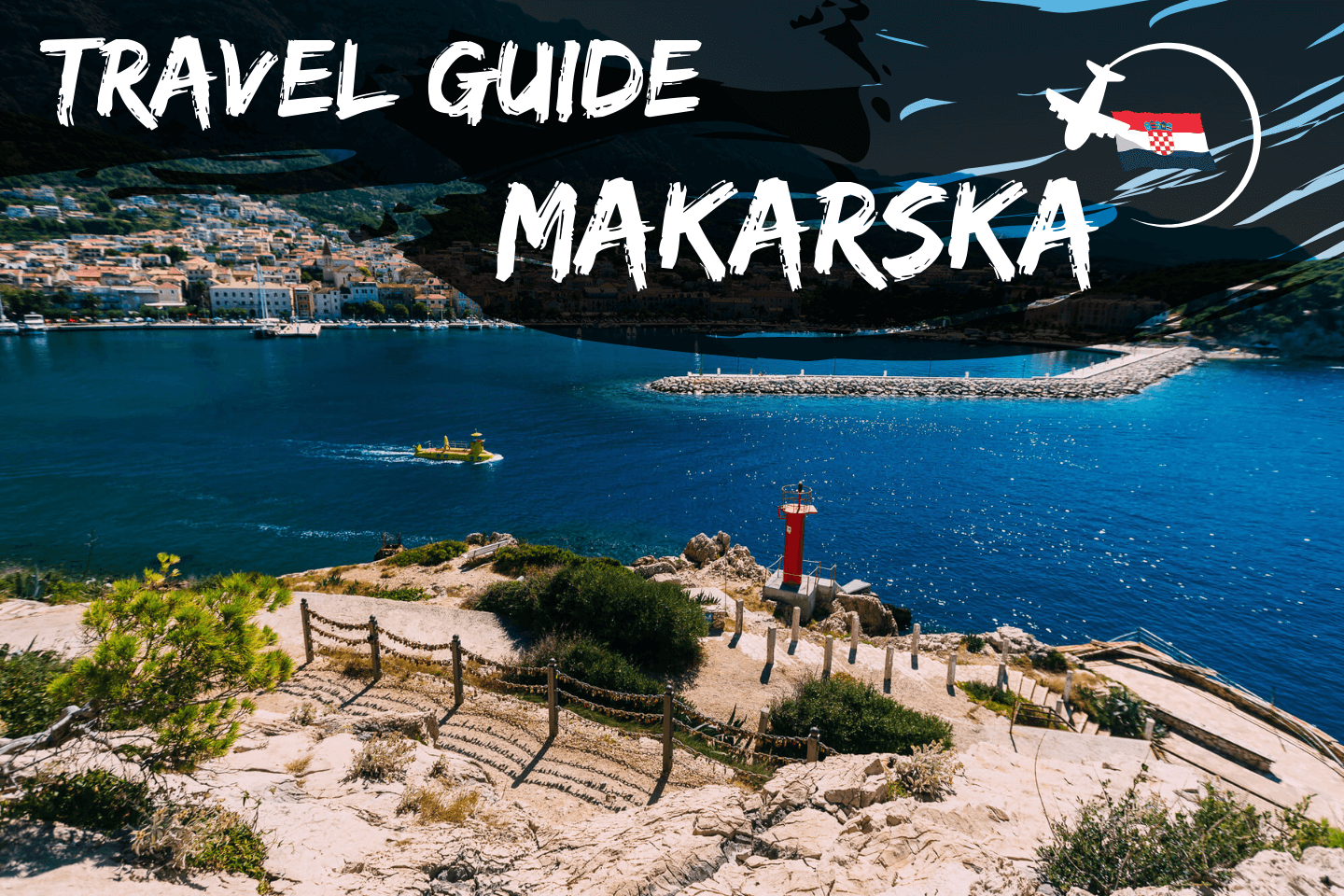 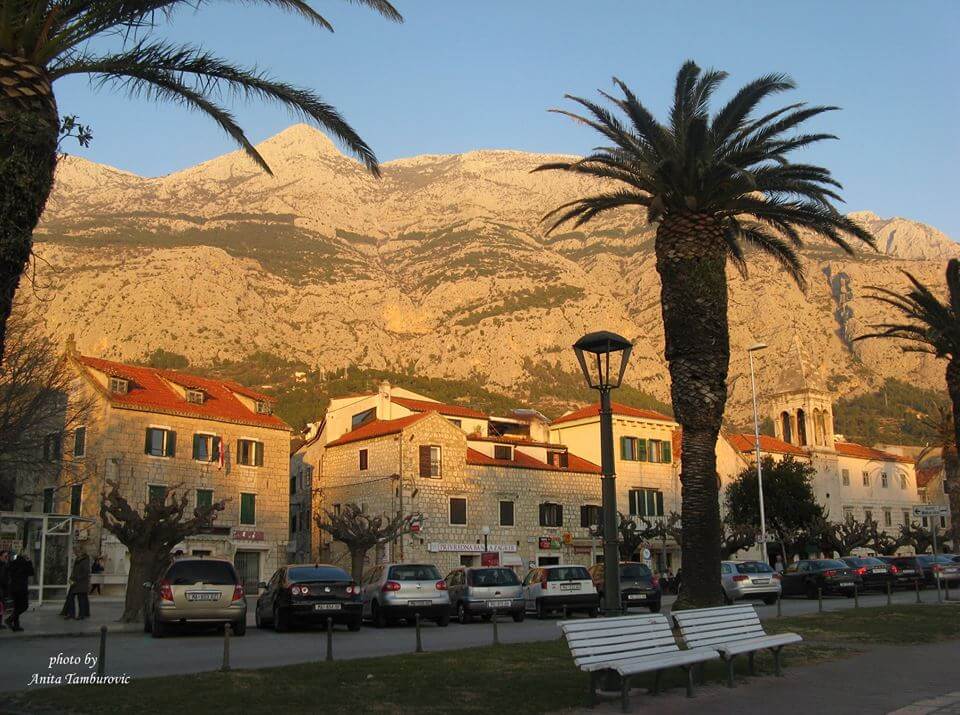 This place became part of the Eastern Roman Empire after the division of the empire, in 395. The city was called back in those days “Muccurum”.
Muccurum was then destroyed in 548 by the Ostrogoths led by their king, Totila. They were then expelled by the Byzantine Emperor.
During the 7th century, the area was occupied by the Narentines, known as “Pirates of the Adriatic” a South Slavic tribe that occupied the Southern Dalmatia.
It is during the 12th century that the city was annexed to the Kingdom of Croatia, but was conquered by the Republic of Venice as of a century later. After the Venetian withdrawal, Makarska was alternately ruled by several authorities: Croatian, Bosnian and Herzegovinian.
In 1452, Duke Stjepan Vukčić Kosača gave the region to the Venetian Empire to protect it from the Turks that were invading the Balkans. But Makarska fell to the hands of the Turks in 1499.
The name Makarska was first cited on paper during the Turks reign, in 1502. Makarska was used as a connection point with other cities of the Adriatic sea so it was a very strategic and protected area. They thus built a lot of defensive buildings to protect the city, including a fortress (used as a defence against the Venetians), three towers and big walls surrounding the city.
Venetia took back the city in 1646 but the Turks were still fighting to gain it back until 1699. 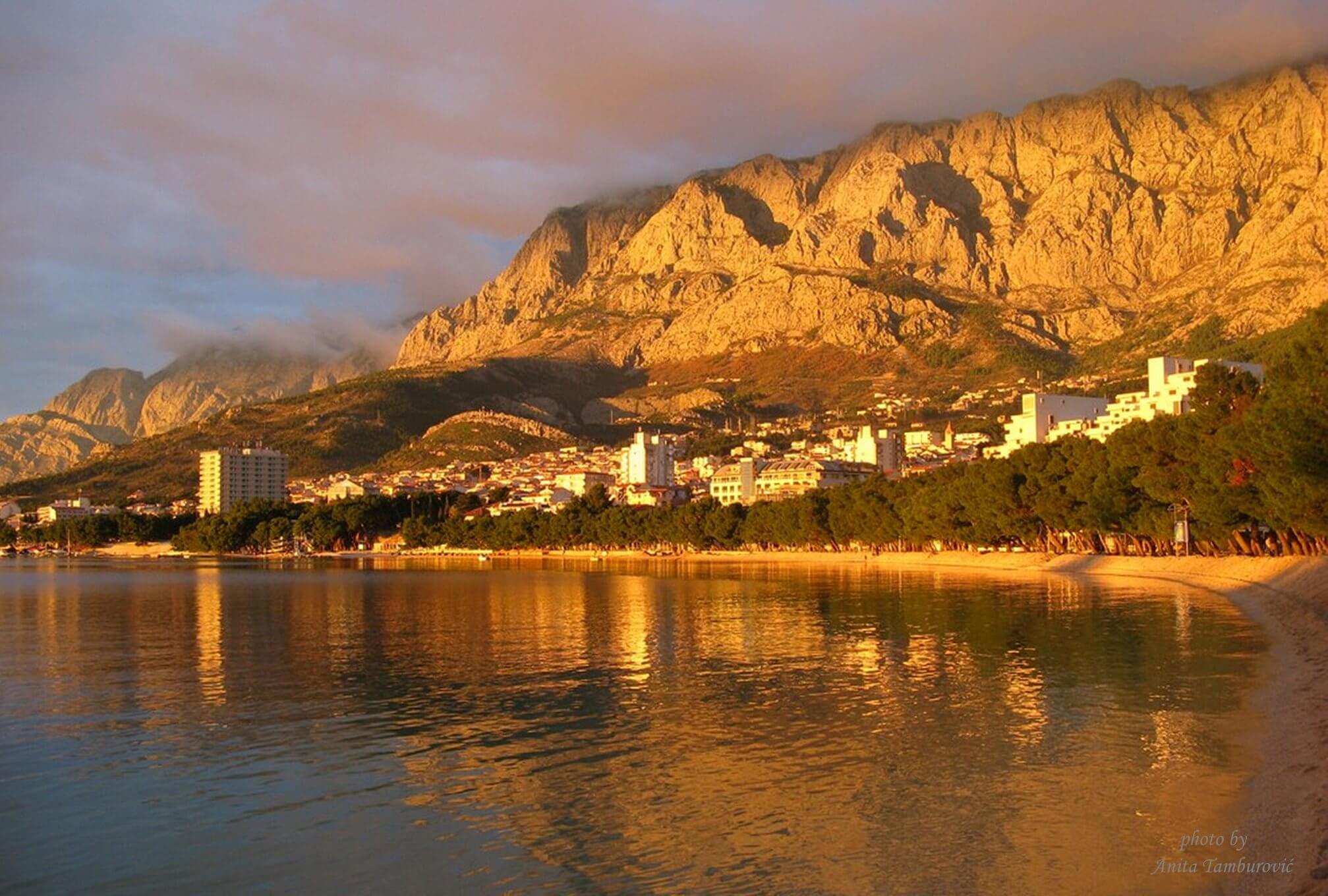 It remains under Venetian influence until 1797 which is when it is given to the Austrians thanks to the Treaty of Campo Formio. It became under the influence of Napoleon for a few years, between 1806 and 1813, before being back to the Austrian authorities. The French empire brought a lot of social and technical innovations during their conquest.
As in the whole region, Austrians imposed a policy of Italianization (that is to say that the official language became Italian). It was only in 1865 that Croatian was introduced.
Makarska remained assigned to Austria-Hungary until 1918 though.
Tourism gots in start in Makarska in 1914 with the erection of the first hotel.
The population of Makarska tripled after WW2 and the city profited from a general growth. 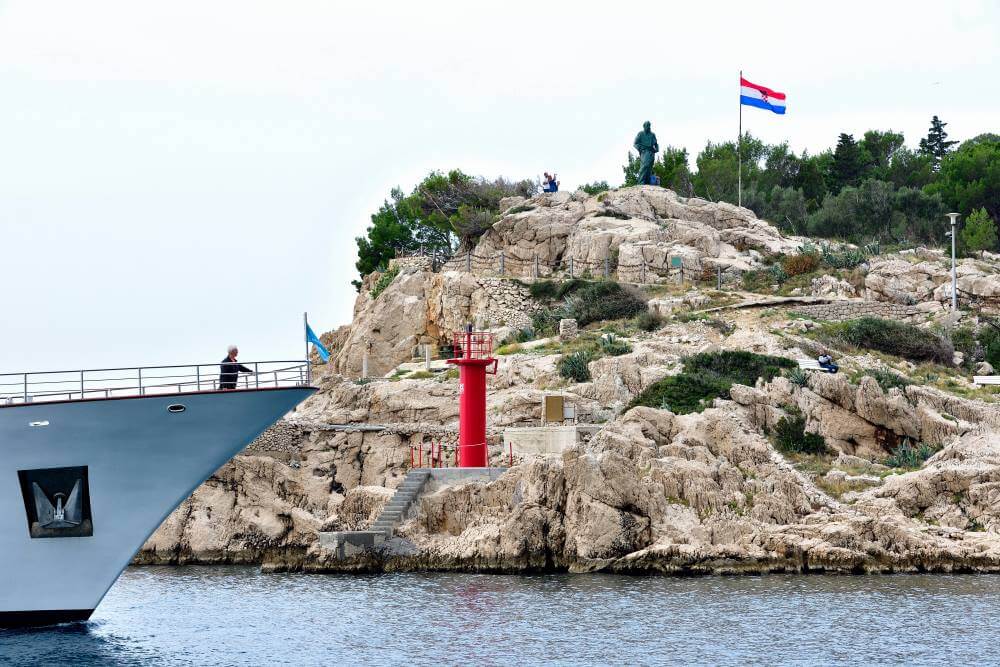 Located in the Kacic Square (the main square) the St Marko’s church was is a nice little church that will delight the history enthusiasts. This baroque church was started building in 1700 thanks to the initiative of the Makarska bishop Nikola Bijanković. In 1756 the Bishop Stjepan Blašković consecrated St Marko’s church.
The church is decorated with several altars including one containing the bones of St. Clement, the patron saint of the city of Makarska and the diocese.
Unfortunately, the church was highly damaged in 1962 because of a violent earthquake and had to be partly rebuilt, changing a little bit the appearance of its interior. 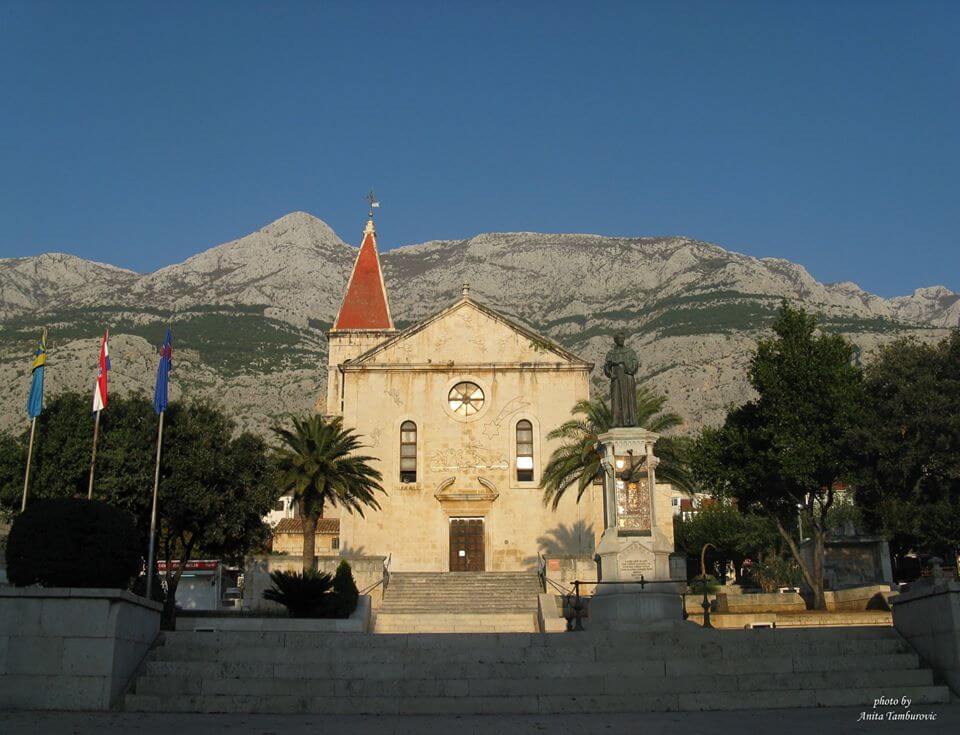 Andrija Kačić Miošić was a very popular Croatian poet and Franciscan monk, as well as a philosopher and teacher, descendant of one of the oldest and most influential Croatian noble families. He was a very wise and brilliant man. He notably contributed to the development of the modern Croatian language. He lived during the 18th century and was born in Brist, near Makarska, so it is not surprising that this monument was erected.
The plinth is decorated with beautiful mosaics and features all the countries mentioned by the poet in his famous songbook “pleasant conversation of the Slavic peoples”.
This expression of national consciousness made Kačić-Miošić a hero in these lands, but it didn’t go down too well with the Habsburg Monarchy of the time. The Empire banned the mosaic; it was finally added in 1922, 32 years after the monument was erected.
Rendić, the sculptor, was one of the most famous and talented Croatian sculptors. 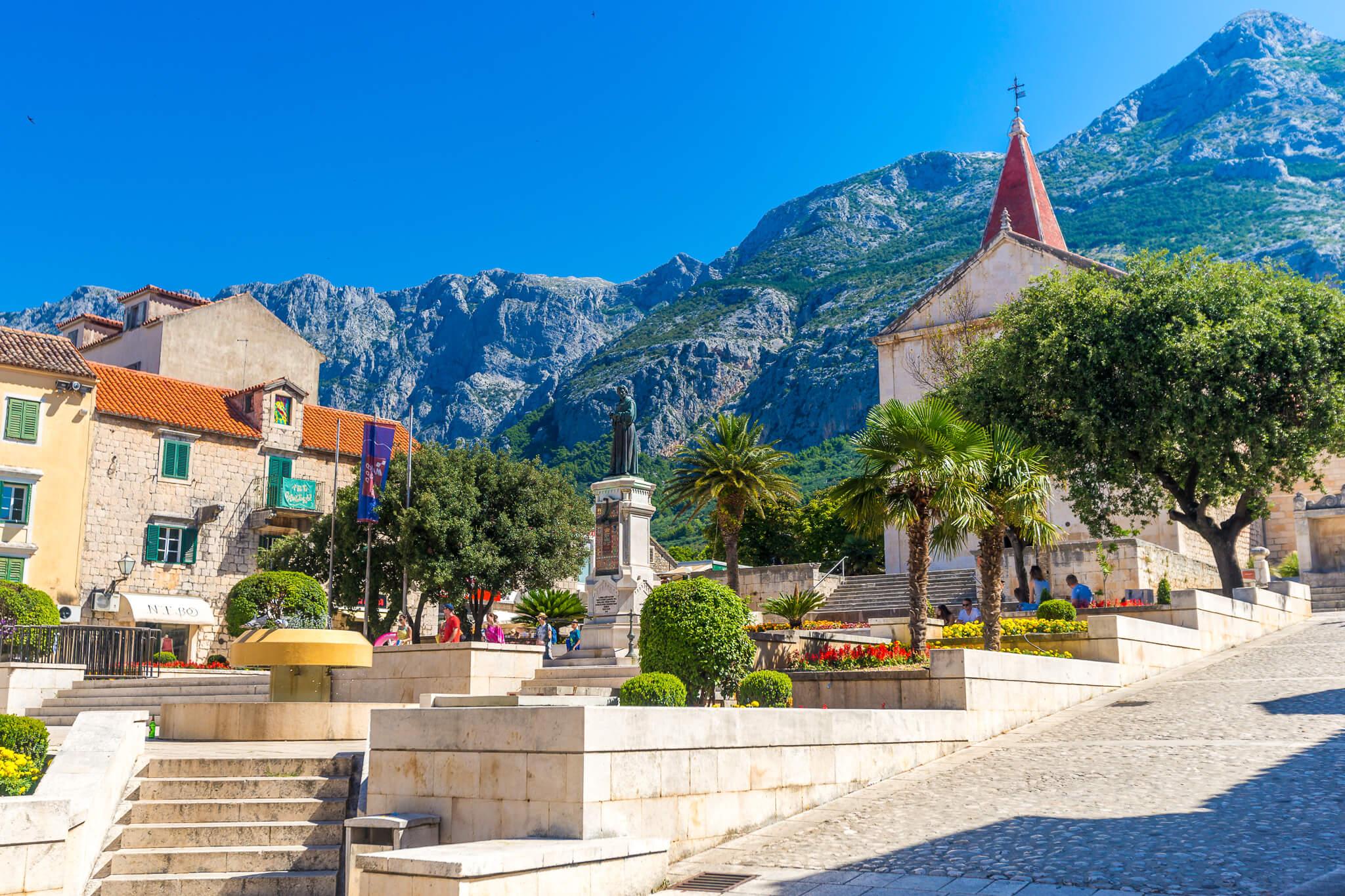 This monastery has recently celebrated its 500th anniversary. It hosts a picture gallery, a library, a museum focusing on preserving shells and the Institute of Mountains and sea.
The Franciscan monastery was built in 1502 after the Franciscans arrived from Bosnia. The monks created a library that hosts more than 5000 volumes (books, manuscripts, journals…). It has a huge archive with writings from different areas and different periods.
A church is located in front of the monastery, the church of St Mary, that was built during the 14th century. It was damaged several times but it is still in a good shape thanks to the fixes provided to the church.
Around 1910 a new church was built, the building finished by the 1940’s. It has a beautiful dome and a magnificent mosaic showing Christ, God and the gift of life that he gives to humans. It was created by Joseph Biffel.
The old monastery has for itself a rustic cloistered courtyard with a stone wellhead, a church and a bell tower. It used to be a school for religious studies where monks could learn about science, natural sciences and humanities.
One of them was Dr Jure Radić, an eminent biologist who created the Institute of the Sea and Mountains that still exists nowadays and that is located in the monastery.
There is as well the very popular Malacological museum, a museum that collects shell species. The museum has the biggest shells collection in the world with more than 3000 different shell species! It is the most famous place in Makarska.

Located on the waterfront, this little church featuring a bell tower will for sure catch your attention.
A clergyman of Split and a Bishop of Makarska, Nikola Bjanković, decided to build it in 1672 to establish a Philippine congregation and build a church dedicated to St Philip Neri. It was finished building in 1680. It has modest yet beautiful decorations. Bishop Blašković and his nephew are both buried in the church, by the main altar.
There is a legend telling that one night, the church was locked and people heard organ music emanating from the church and they thought that it might be the Bishop trying to make the faithful understand that he wanted to be moved out of the church. When they opened the church, they realised that his body was perfectly preserved.
When they closed back the grave, the music was never heard again. True miracle or preserving sea salt, it is up to you to choose! 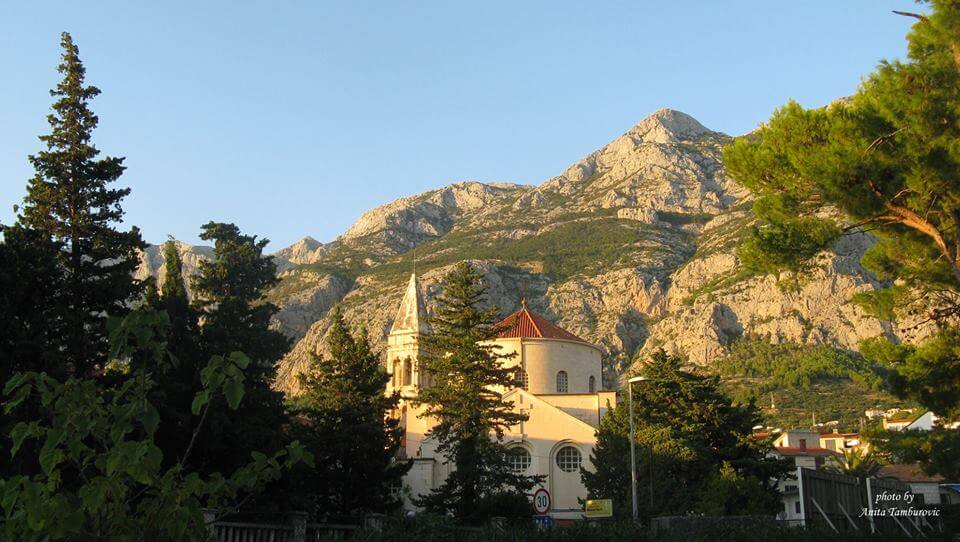 The little church of St Peter is located on the St Peter’s peninsula that protects Makarska’s harbour. It is a city park with a long promenade and beaches. This is a true fragment of beautiful nature. The church was built during the 15th century. Around the church and the peninsula, you can find Roman, Venetian and Prehistoric remains which make it a very interesting historical site. You can as well admire the Biokovo mountains in the background, the sea, the islands and the city. There is as well the St Peter’s lighthouse that was built in 1884 and an undersea cave that was built during the WW2 by Germans to store submarines. St Peter’s peninsula is a very famous place to jump for the cliffs, people come from all over Europe to try it!

TRANSPORT AND ACCOMMODATION IN MAKARSKA

If you are travelling to Makarska or any other town on Makarska Riviera by car, depending on the direction (Austria, Slovenia, Hungary) you need to go through Zagreb to Split with main Croatian highway A1, or along the Croatian coast from Rijeka to Split or Makarska. 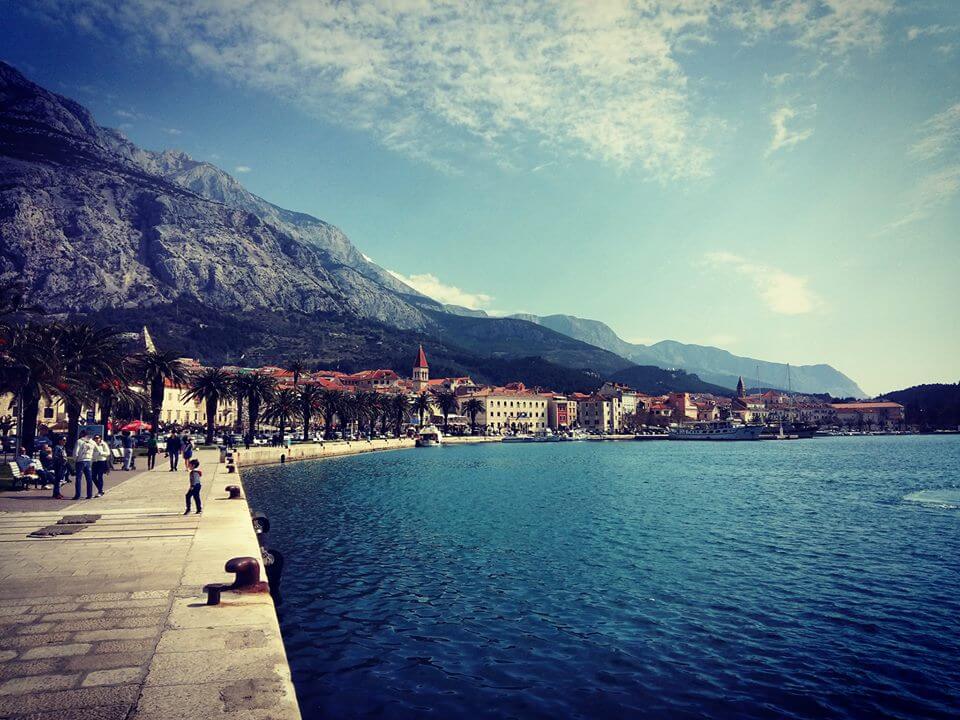 The closest international airports to Makarska are the ones in Split and Dubrovnik (Dubrovnik is 165km away from Makarska). From Dubrovnik or Split, frequent bus lines are available to Makarska, or you can choose taxi (it must get very expensive so try to avoid it) or car rental.
The train station in Split is just next to the bus station in Split, from where you can continue your journey to your final destination on Makarska Riviera.

InterCity trains operate now from Zagreb to Split and back three times a day (with additional connections at night).

Bus lines connect all parts of the country. Regular international bus lines connect Croatia with all neighbouring countries, as well as most of the middle European and West European countries.
You can stay in one of the numerous hotels of Makarska, including some overlooking the sea. 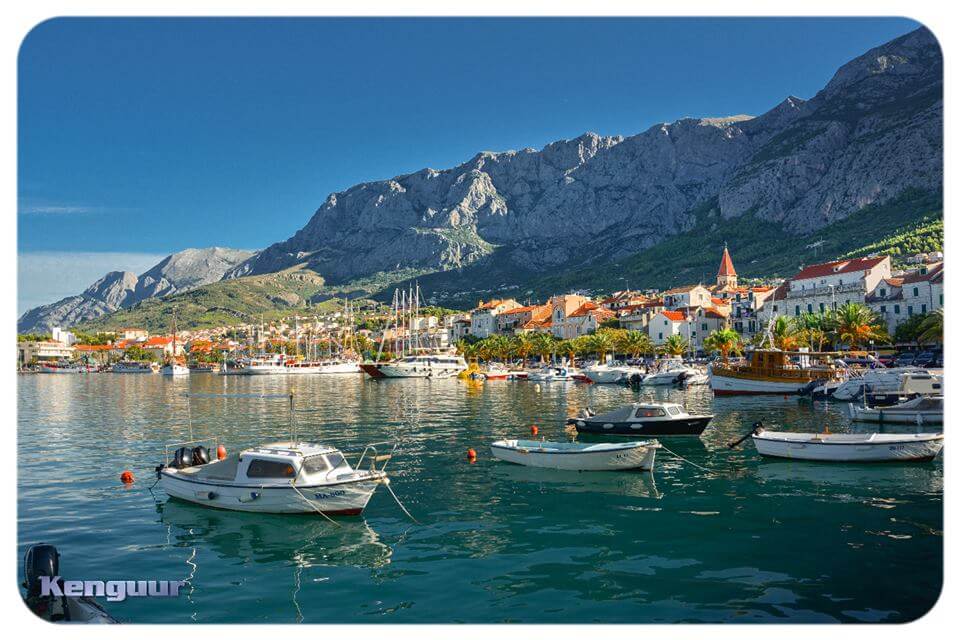 WHAT TO DO IN MAKARSKA

Start your day in Makarska drinking a coffee overlooking the sea on one of the numerous terraces offering a great view. Then head down to the Kacic Square to go to the green market, a market taking place each morning and that sells fresh products and flowers. Take advantage of being in Kacic to visit the old Franciscan monastery and the church. Spend time here to immerse yourself in this very unique atmosphere. Don’t forget to admire the Statue of Andrija Kačić-Miošić while being in Kacic square. Then enter the Malacological museum to admire all the different shells. You will spend a little bit of time here as there are more than 3000 species. After the visit, you can whether eat a picnic using what you bought at the market whether heading down to a restaurant. There are many good restaurants, you won’t struggle to find one.

After lunch, head down to the Nugal beach that is 20 minutes away walking from the centre but that is worth it. Spend a few hours here to relax and maybe even to swim. Once you feel like moving, head down to the St Peter’s peninsula to visit the park. Have a look at the church and at the ancient remains, it is interesting and beautiful. Don’t forget to take pictures of the mountains in the background! Check also the lighthouse that is quite charming. End your day by admiring the beautiful sunset on the peninsula, it is the best one in Makarska. 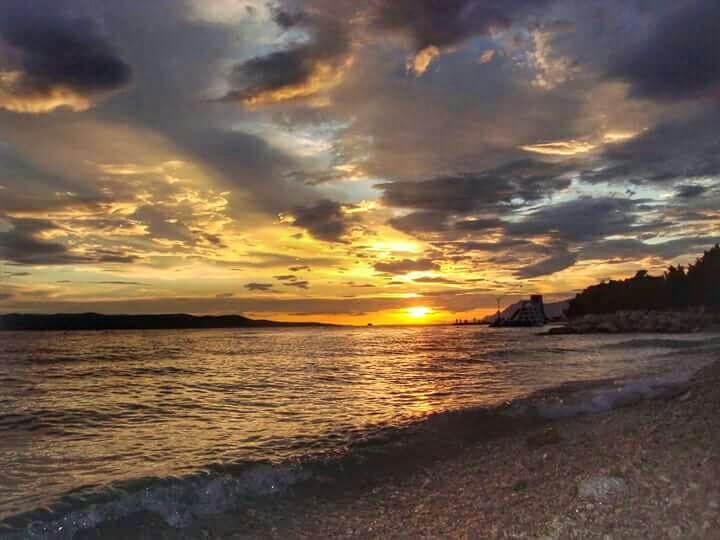 Now that it is night time, put on your best outfit and let’s go! Makarska is famous for its nightlife. If you want something trendy and with an overexcited atmosphere, I would suggest you to go to the deep bar and club, it is the place where all young people meet, you are sure to spend a great night there. Furthermore, it is built in a cave which gives it a surreal atmosphere, you have to try it once in your life! 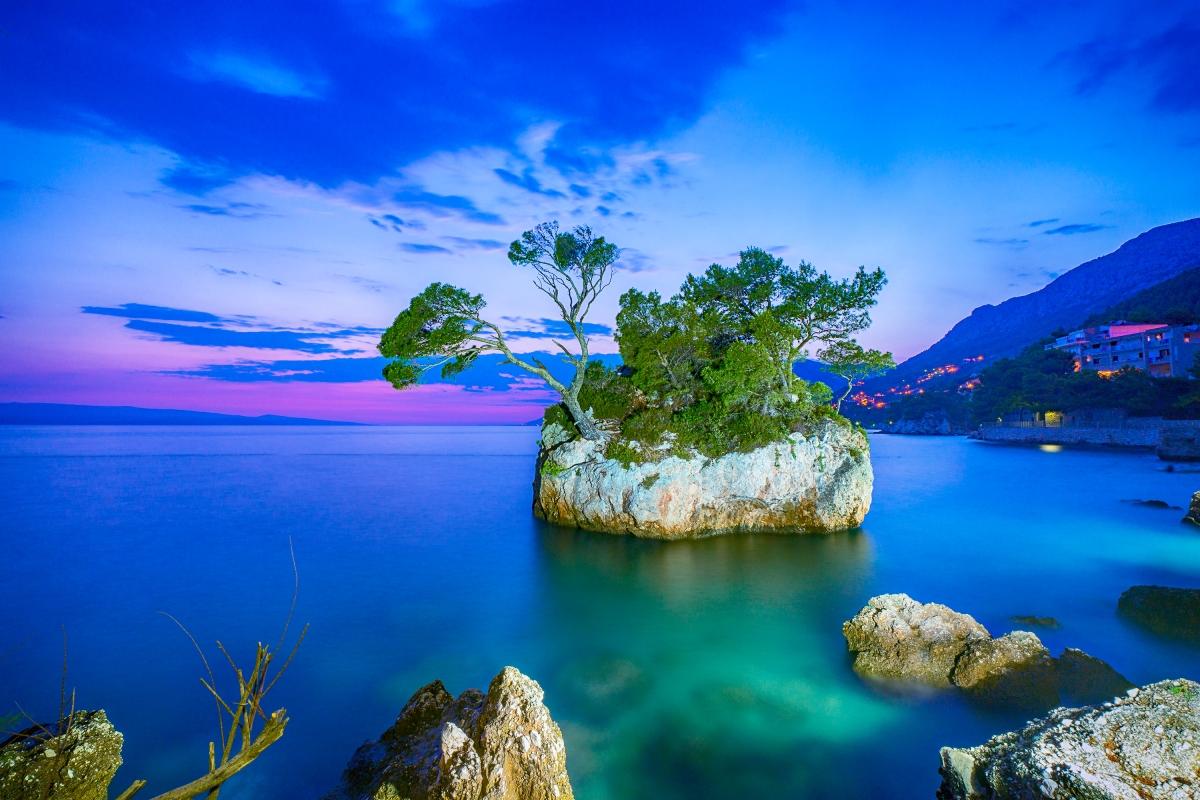