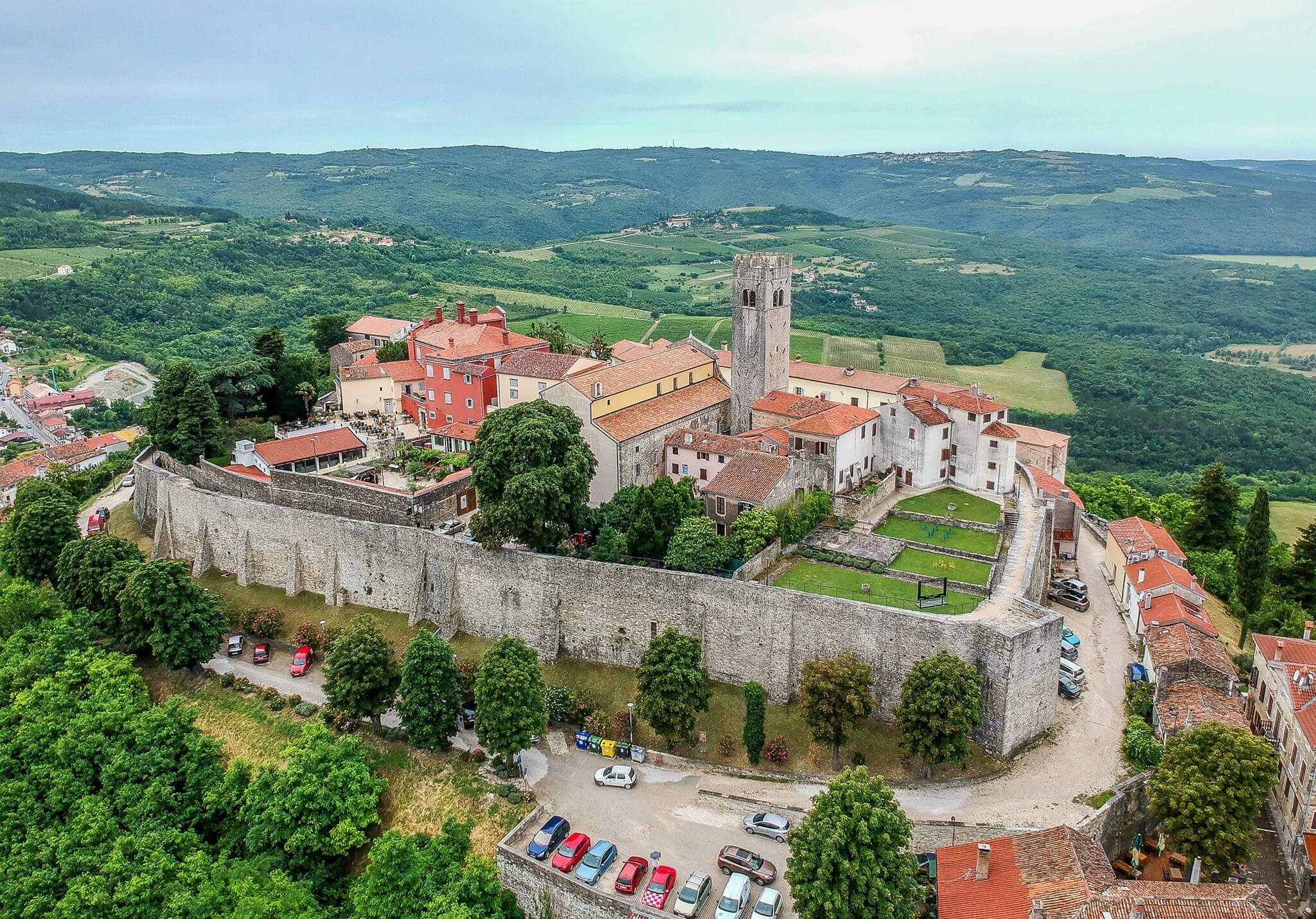 Motovun is the town of medieval times which was outgrown in the place of ancient city Castellieri. As the town is located on a hill 270 metres above sea level, you can’t enter it by car or by bus. The parking is placed at the foot of the town.

The town was owned by the Bishop of Parenzo during the 10th and 11th centuries. Since 1278, Venice took the town and built solid walls around it,  which are still presenting to our days. These walls used as a walkway with unique views over the four corners of Istria. Different Motovun ruling families and two gravestones of Roman inhabitants’ coats-of-arms are preserved on the inner town walls. 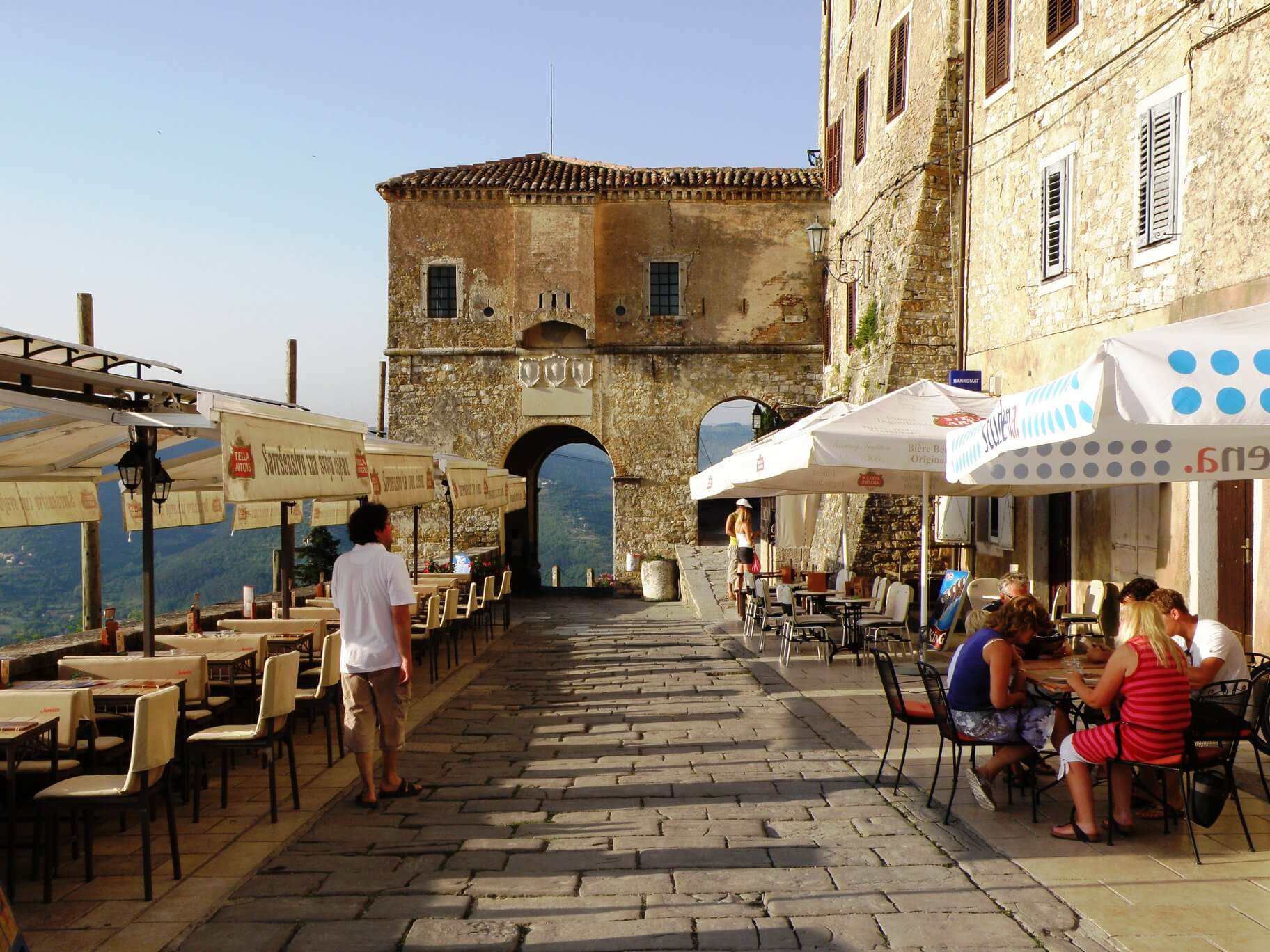 System of internal and external fortifications with towers and city gates containing elements of Romanesque, Gothic and Renaissance styles, built between the 14th and 17th centuries joins three town parts. This system refers to the Venetial colonial architecture.

By some sources, well-known Venetian architect Andrea Palladio designed the late-Renaissance church of St. Stephen in the 17th century. So a piece of Renaissance art can inspire you and take back to history. In this town.

What we have in the church are several works of art as the marble statues of St. Stephen and St. Laurence by Francesco Bonazzo and the 17th-century painting of the Last Supper over the altar by an unknown Venetian artist. There are water cisterns in the square in front of the church dating from the 14th and 15th centuries. 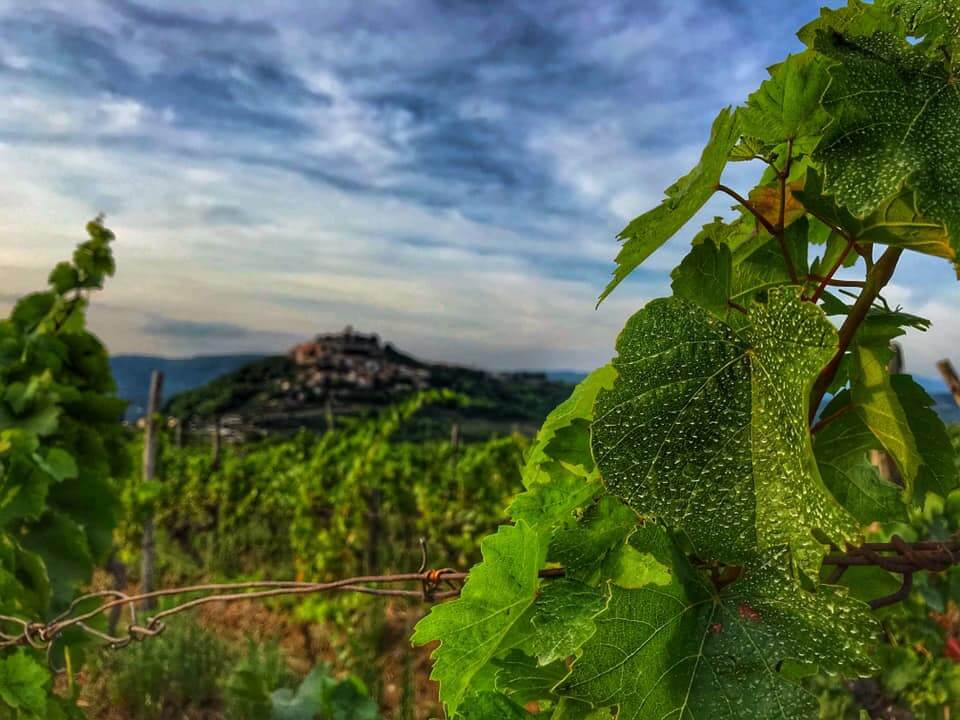 The town has a popular legend which describes that it is patronized by the giant Veli Jože. According to legend, it was the one who built the walls of the city and dug the city canals with his mighty hands. The story was written by the nationalist Vladimir Nazor, one of the most important Croatian writers and poets of the 20th century.

The external square is placed at the entrance to the city centre like a belvedere above the former defence tower.

You can see a municipal loggia from the 16th century which is located at the very edge of the square. From the loggia, it can be seen a wonderful view of the Mirna river valley. The municipal palace decorated with the remains of Romanesque double windows from the 13th century is on the eastern facade of the square.

The spacious main square with a city bell-tower - with a jagged parapet of Romanesque-Gothic features from the 13th and 14th centuries on the top is in the centre of the town. Also, under the entire square, you can see a large municipal water storage tank with two stone gorges from the 14th and 15th centuries bearing the municipal coat of arms.

The parish church of St. Stephen is a large early baroque structure in the late Palladian style where Stone statues by the Venetian sculptor Francesco Bonazzo from the 18th century and a painting of the Last Supper attributed to Stephano Celestio are placed.  Venetian late baroque painter Guiseppe Bernardino Bisson has decorated and painted the church ceiling. The elaborate rostrum is a valuable piece of Venetian baroque wood carving. There are also organs which were made by Gaeteno Callido in Venice in the late 18th century. 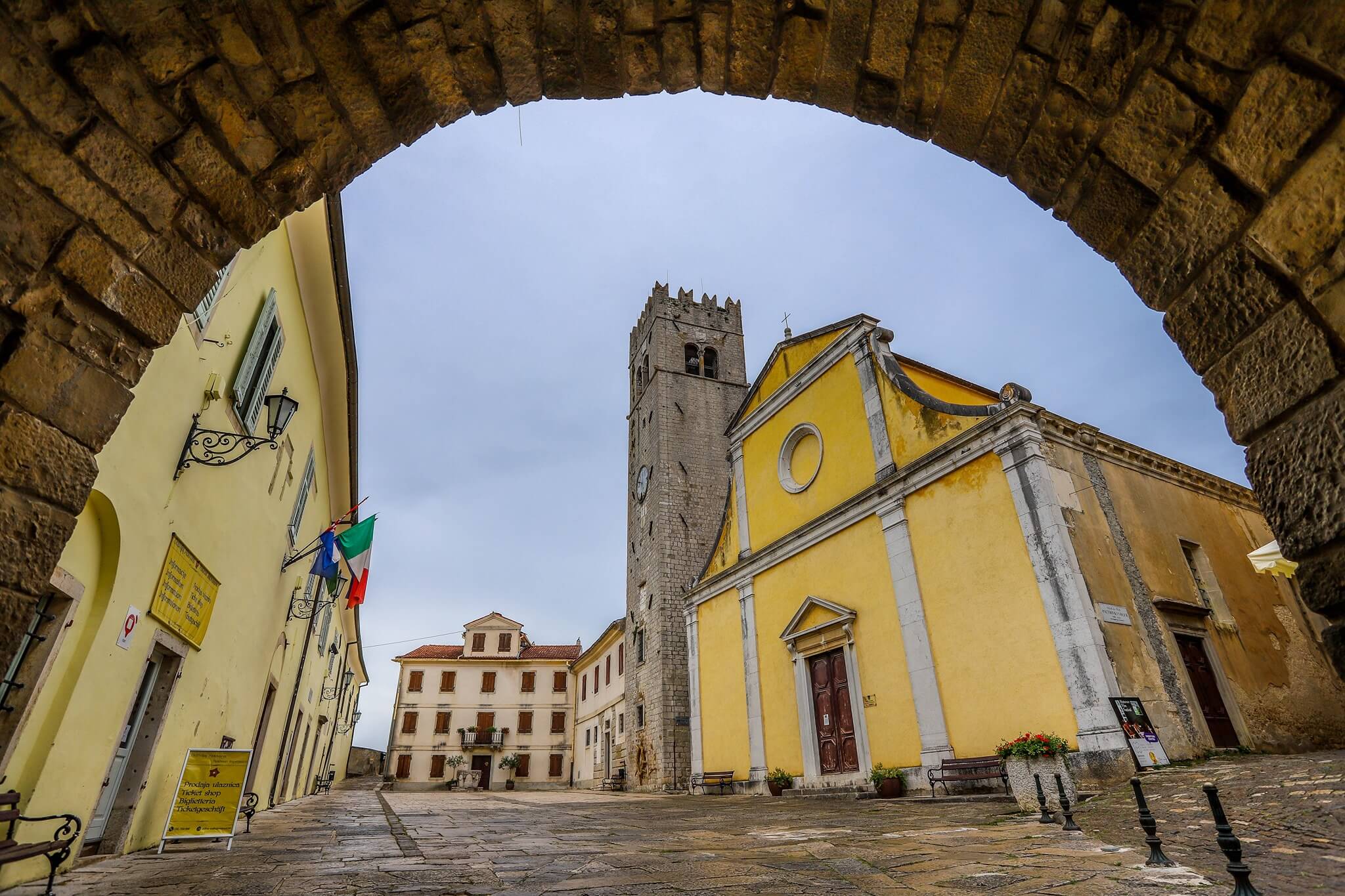 In the church of St Mary of the Gate, there is a small wooden Renaissance goldplated altar retable, the work of the Venetian carver Paolo Camsa from the mid16th century.

Motovun forest is must-visit of Motovun. It is a unique last preserved Mediterranean forest stretching alongside the river of Mirna. There are a variety of trees in the forest as common oak, elm and narrow-leaved ash. The most interesting thing is that the world’s largest natural habitat of Tuber Magnatum Pico, one of the most valuable truffles grows in the forest. Motovun forest is a popular destination among truffle hunters.

Accommodation and Transport in Motovun

You can reach Motovun by car or by bus from any point of Croatia. But it is not allowed to enter the city by bus or car. There is a parking place at the foot of the town. Further, you have to climb to the city by feet. But don't worry, the climbing is not totally tiresome. You will enjoy the views and will not notice how you have reached the town.

If you are coming from abroad, then the nearest airport is in Pula city, from where you can reach Motovun in one hour by car.

Regarding accommodation in Motovun, as the town is not so large, the choice of hotels is not that broad. However, you will find hotels and hostels for any budget in this town ranging from luxury hotels to campsites and hostels. 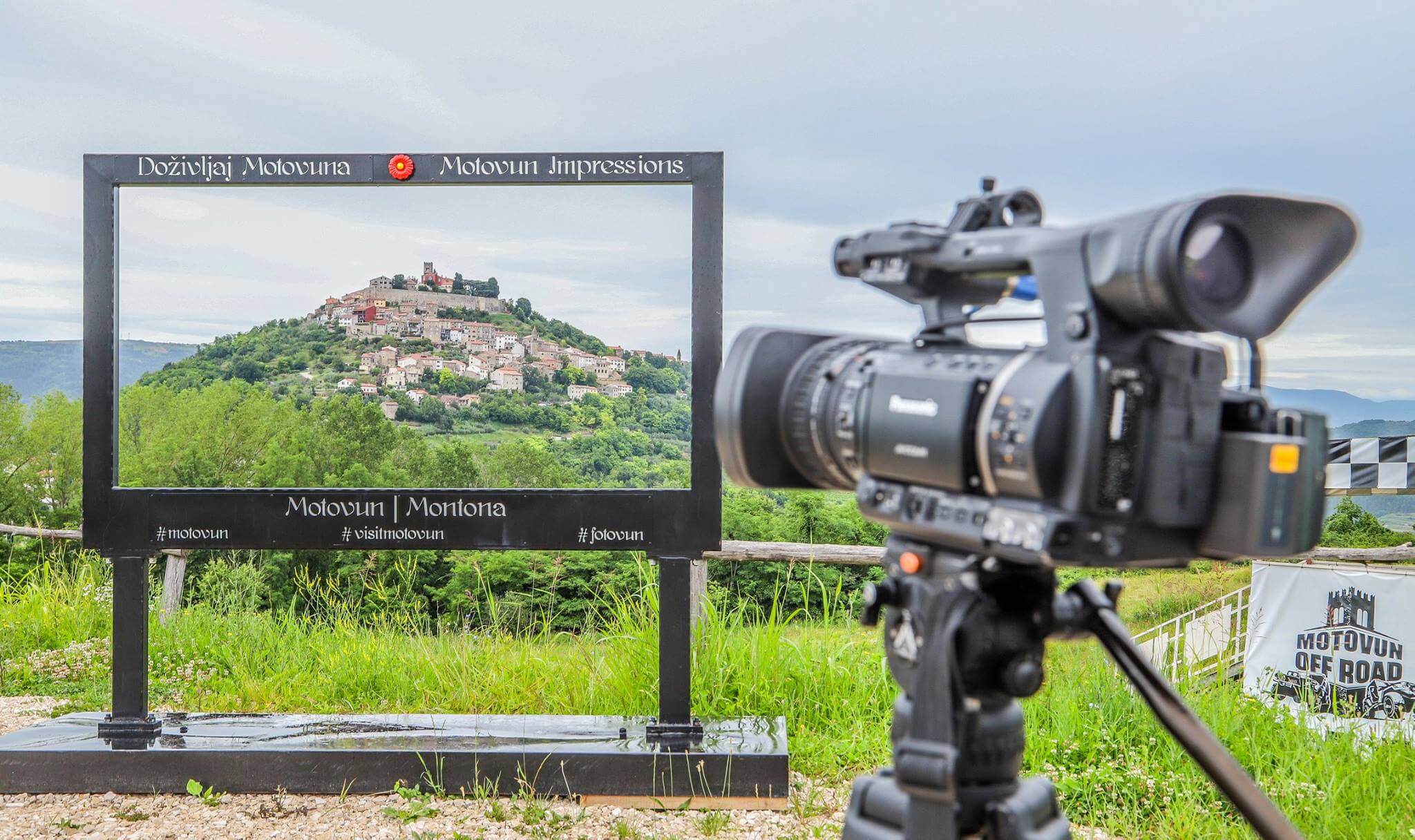 What to do in the city of Motovun?

The second name of Motovun is “The Capital of Truffles”: from October there are festivals to search for these delicacies. People use specially trained dogs for searching the truffles. Truffle hunts can be attractive for many guests who like a little bit of adventure and would like to have taste for one of the most valuable culinary delicacies. 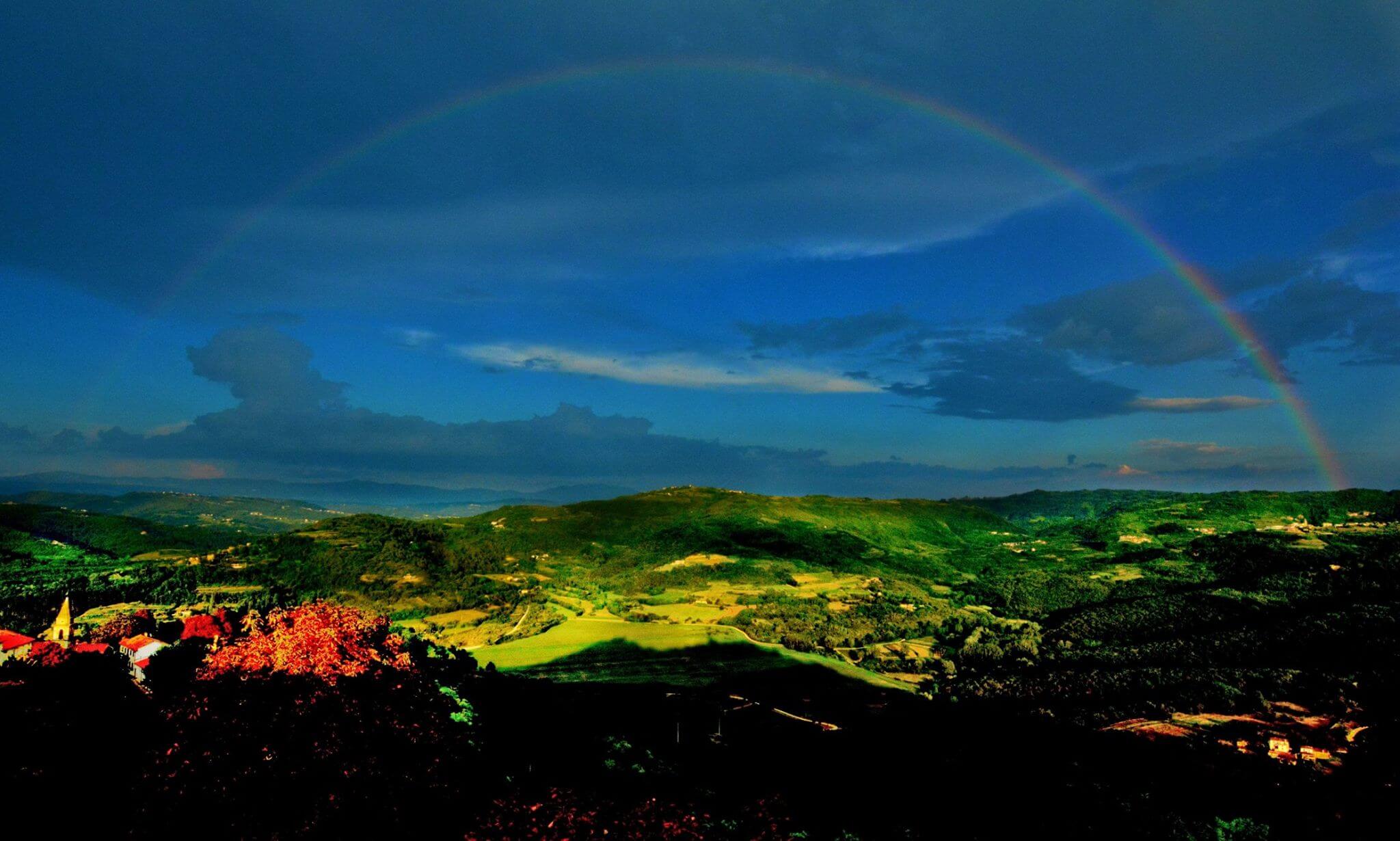 Since Motovun is located on a hill, you’ll be able to enjoy a picturesque view of surrounding vineyards and balloons flying over your head. As the climate is favourable for enabling balloons to fly easily all year long, there are several ballooning events taking place in the town. Don’t miss the chance to explore the town from the sky!

In summer, Motovun Film Festival is held in the town. Usually, in the second half of July, you will be able to enjoy feature-length and short films from all over the world. Also, the music and parties till dawn, different sorts of entertainment, the abundance of Istrian food and wine – the enchanting atmosphere of the festival makes you fall in love with this town.

There are also a variety of restaurants, cafes, souvenir shops where you can taste and buy truffles and wines of locals. You can be adventure seeker, balloon rider, “truffle guest”,  maybe you would like to walk on the longest 1052 steps stairs in Istria or you just simply want to rest your mind in beautiful and peaceful nature, Motovun is a perfect choice!