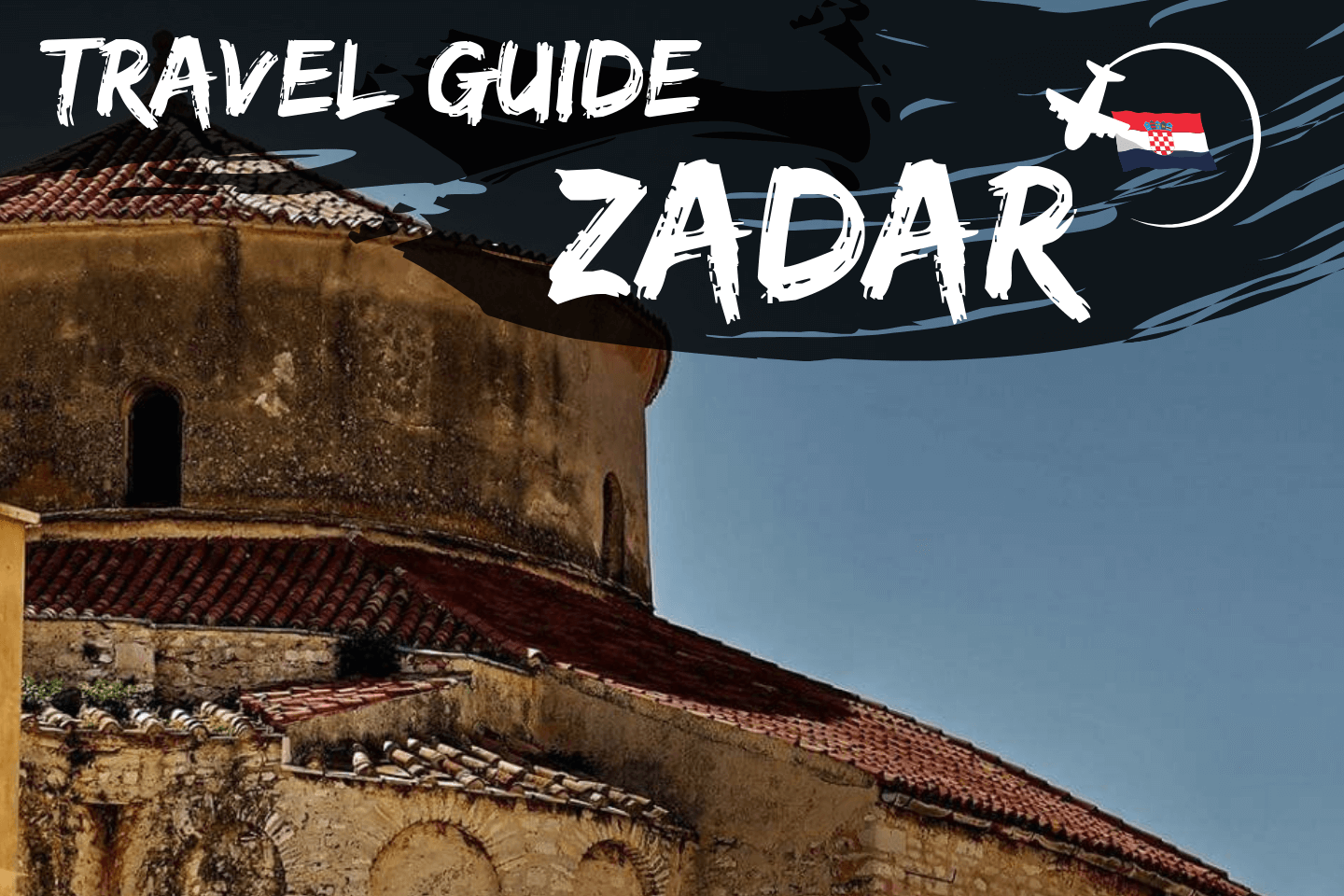 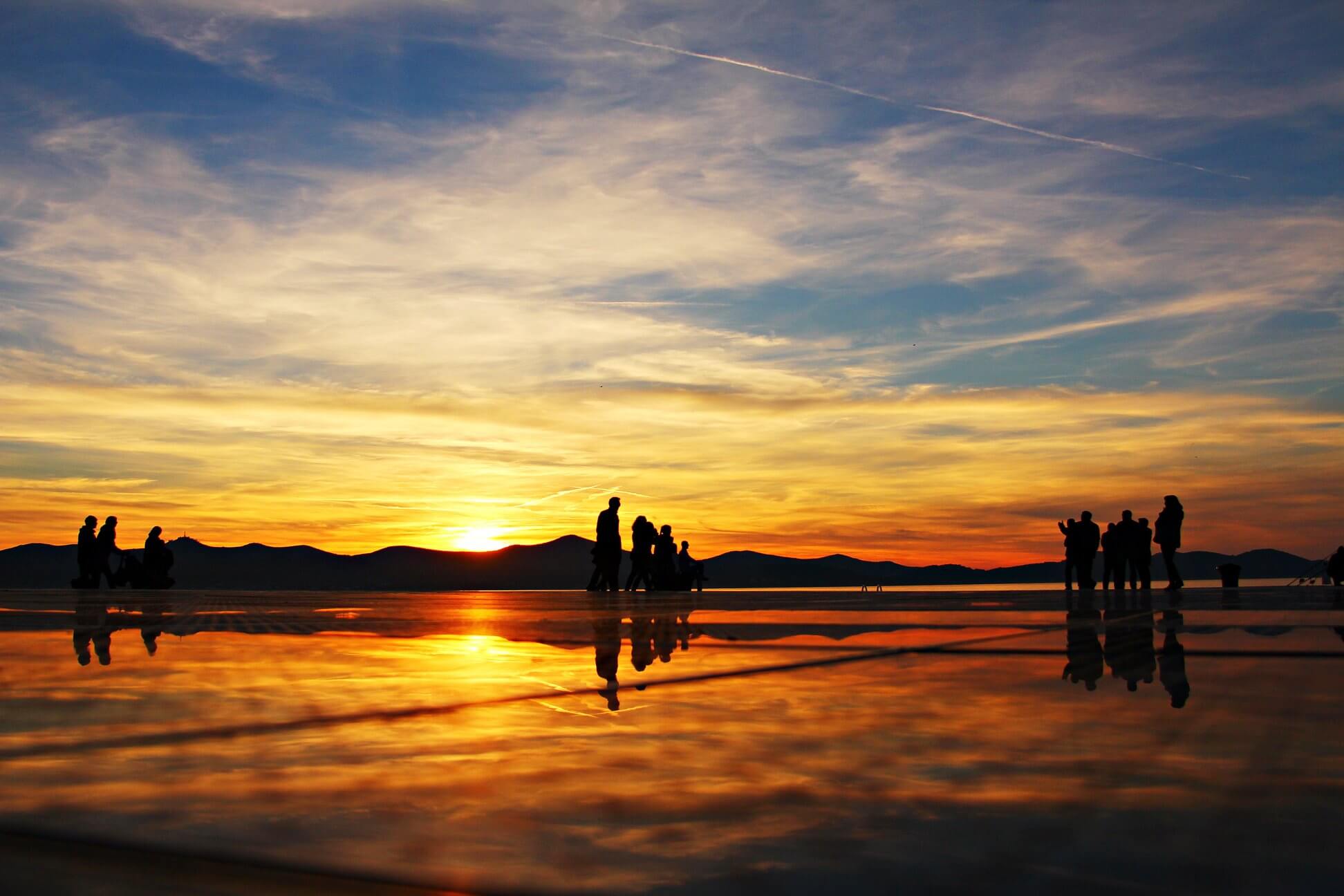 Zadar has always been a dominated city through the ages.

The city is located on a former liburnians centre, if you don’t know what are those, they were Roman ships. Zadar was turned into a Roman colony after they helped Octavius during the first Dalmatian war. It became then “Lader”. Thanks to the wine and oil trade; Zadar was prosperous and dynamic under the empire’s influence.
When Goths invaded the area, the colony was freed, until 538 which is when the city was back under the Byzantine’s rule (that ended by the end of the 14th century). 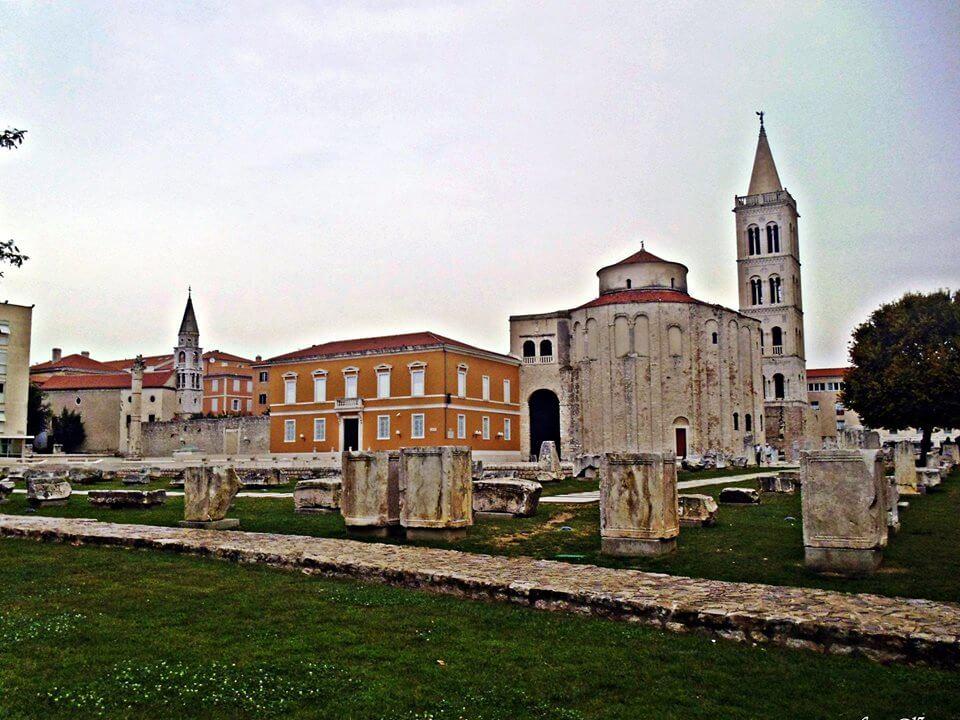 Venetian people plundered the city in 1202 while the city was under Hungarian domination (until 1358 which is when the Zadar peace treaty took place, entailing Hungarian troops withdrawal).
In 1409 the city got occupied again as Venezia took it under its domination. The city was used as a way to repel Turkish invasions.
In 1797, Austrian troops seize Zadar but between 1808 and 1813 they lose it in favour of Napoléon 1er; after which they regain Zadar back until the end of the World War I.
Thanks to the Rapallo treaty, it became then part of the Italian Kingdom but during the World War II (in 1942-1943) most of the Italian people in Zadar run away because of allied bombings. The city loses thus many Austro-Hungarian buildings, destroying a big part of Zadar’s historical past. Fortunately, most of the older buildings remained unscathed, allowing Zadar to remain a city of history.
In 1947, the city became officially Yugoslavian and incorporated into the Socialist Croatian Republic, which is why Zadar remained Croatian after the dissolution of Yugoslavia in 1991.
Nowadays, the city is on the rise with more and more tourists each year appealed by the charming historical dimension of Zadar and the magnificent Adriatic sea. 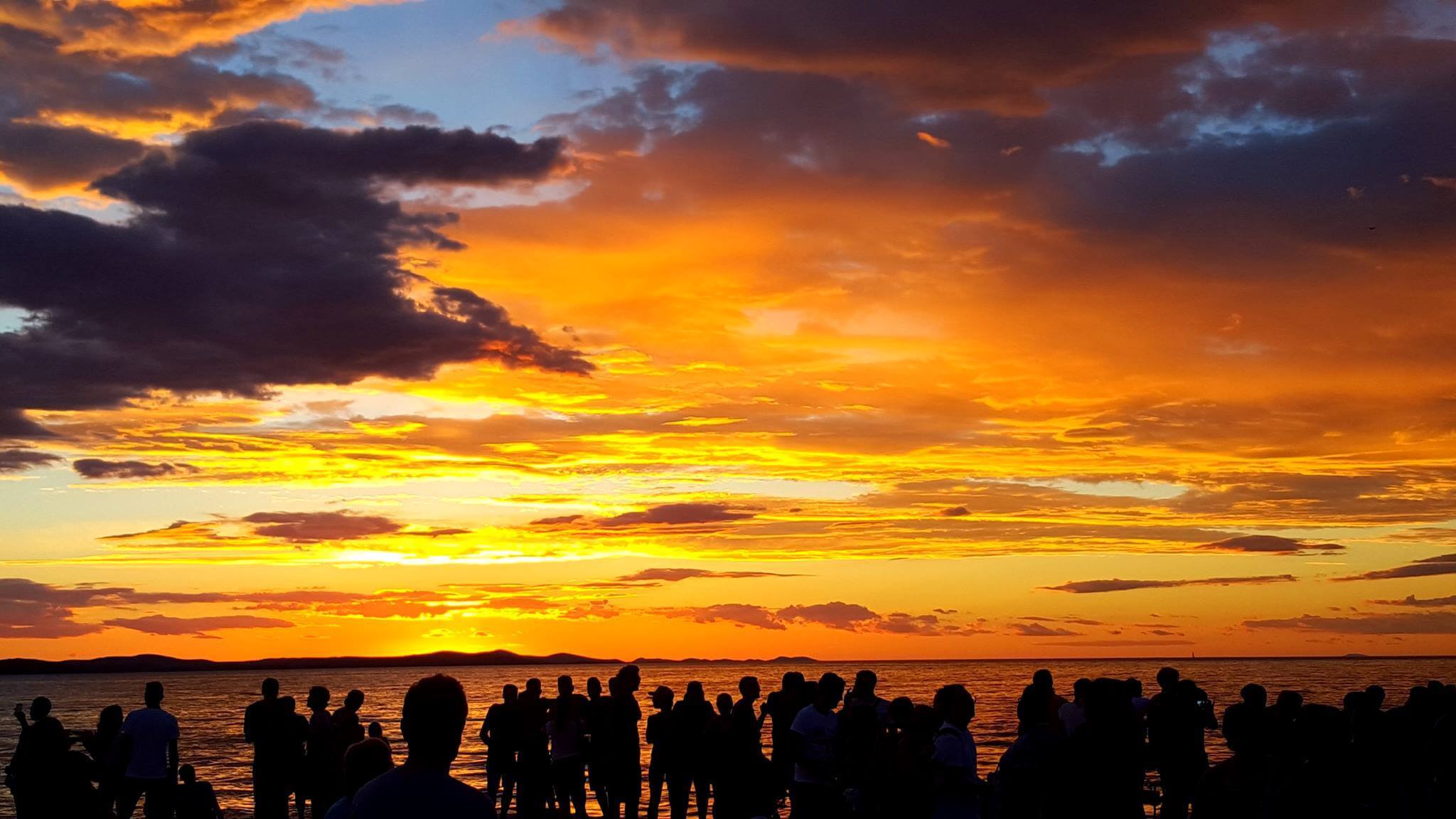 Once in Zadar, there are many things you should see and visit. Its historical buildings, its religious edifices, its seaside… There are so many things that we can’t write about everything, we will talk about the most important sights and for the rest, you will be able to see it for yourself.

One of the most famous things is Zadar is its sea organ or Morske orgulje in Croatian. Created by Nikola Bašić, the organ has a modern design and uses nature to function. Thanks to the water that goes into the pipes, you can hear a very particular yet very relaxing sound, like a melodic wuthering. With the glistening water, the sun reflecting its sunrays, the place gives a mesmerizing and delightful impression of magic. 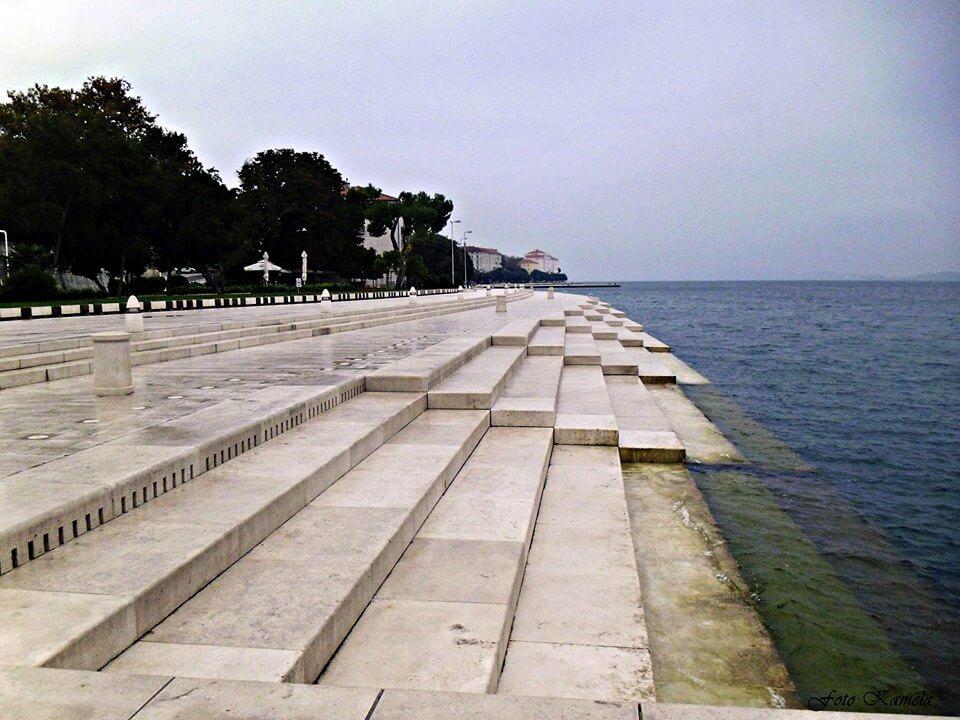 Greetings to the sun

Next to the Sea organ is the “Greetings to the sun” display, a solar-powered piece of art. Composed of 300 multi-layer glass-plates, the piece has a circle shape and starts shining as soon as the sun sets. Nikola Bašić also made this one. The bright colours sparkling in the night with the organ music audible in the background give this place a special charm, almost cosmic. The display can be enjoyed by any type of public because even the younger ones enjoy the play of lights. It feels almost like you're in space, surrounded by thousands of stars! 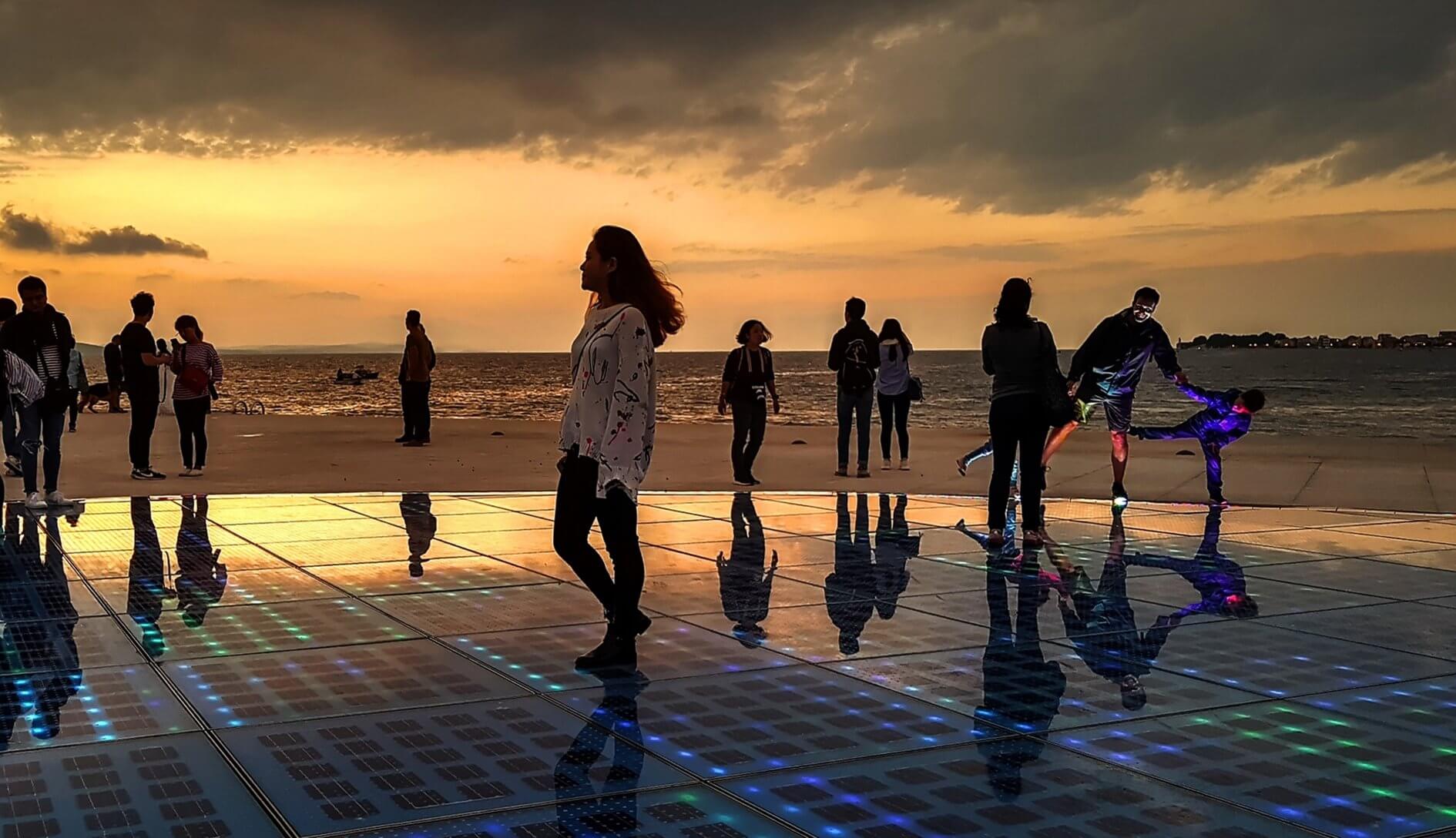 This church as a very distinctive Byzantine architecture and will please every history lover. It is called this way because St Donat of Zadar was the one that initiated its construction. With a special rounded shape, the interior is soberly decorated but designed so that the sunlight can illuminate the sanctuary all day long. During the summer, classical music is played at evening for visitors’ pleasure. It is the biggest Byzantine church in Croatia, and we highly recommend you to visit it because it is an obvious vestige of the Byzantine and Dalmatian age. 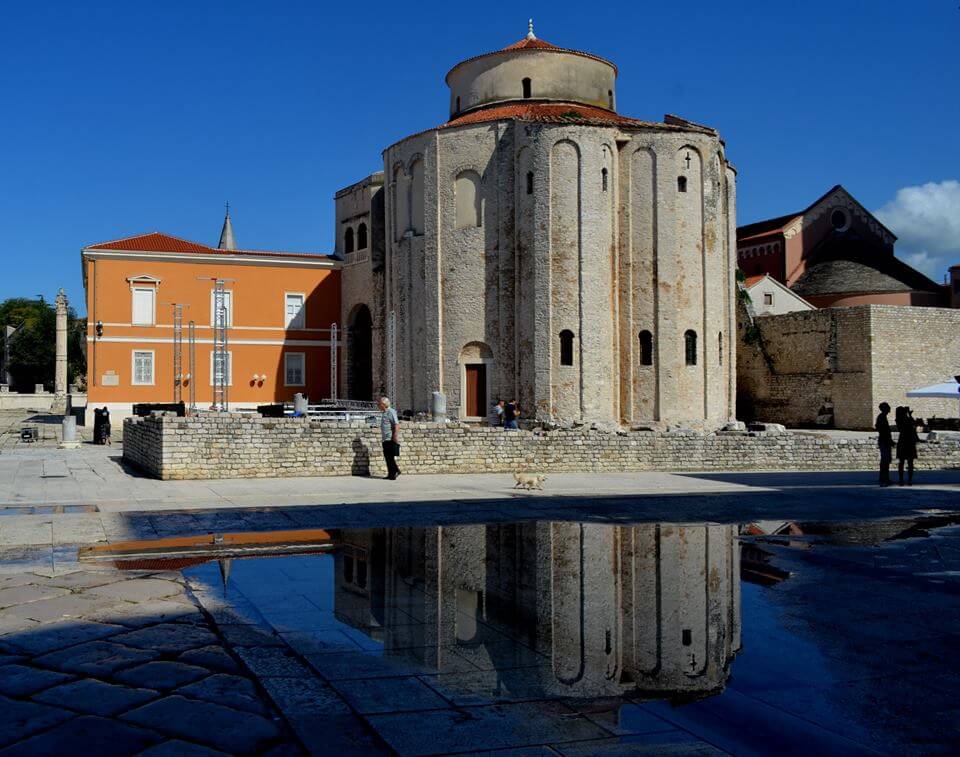 This forum was specially intended for trade, as a marketplace. It is the largest on the eastern side of the Adriatic sea. Farmers used to come here to sell directly their products and goods. Over times, this forum changed from a retail place to a wholesale trade place, then to a place of sharing, where all social classes were mixed. It was a place to discuss, to debate, to gaze at liveliness and to meet people. The forum, near the St Donat church, is still preserved and we can easily how it was back in times. 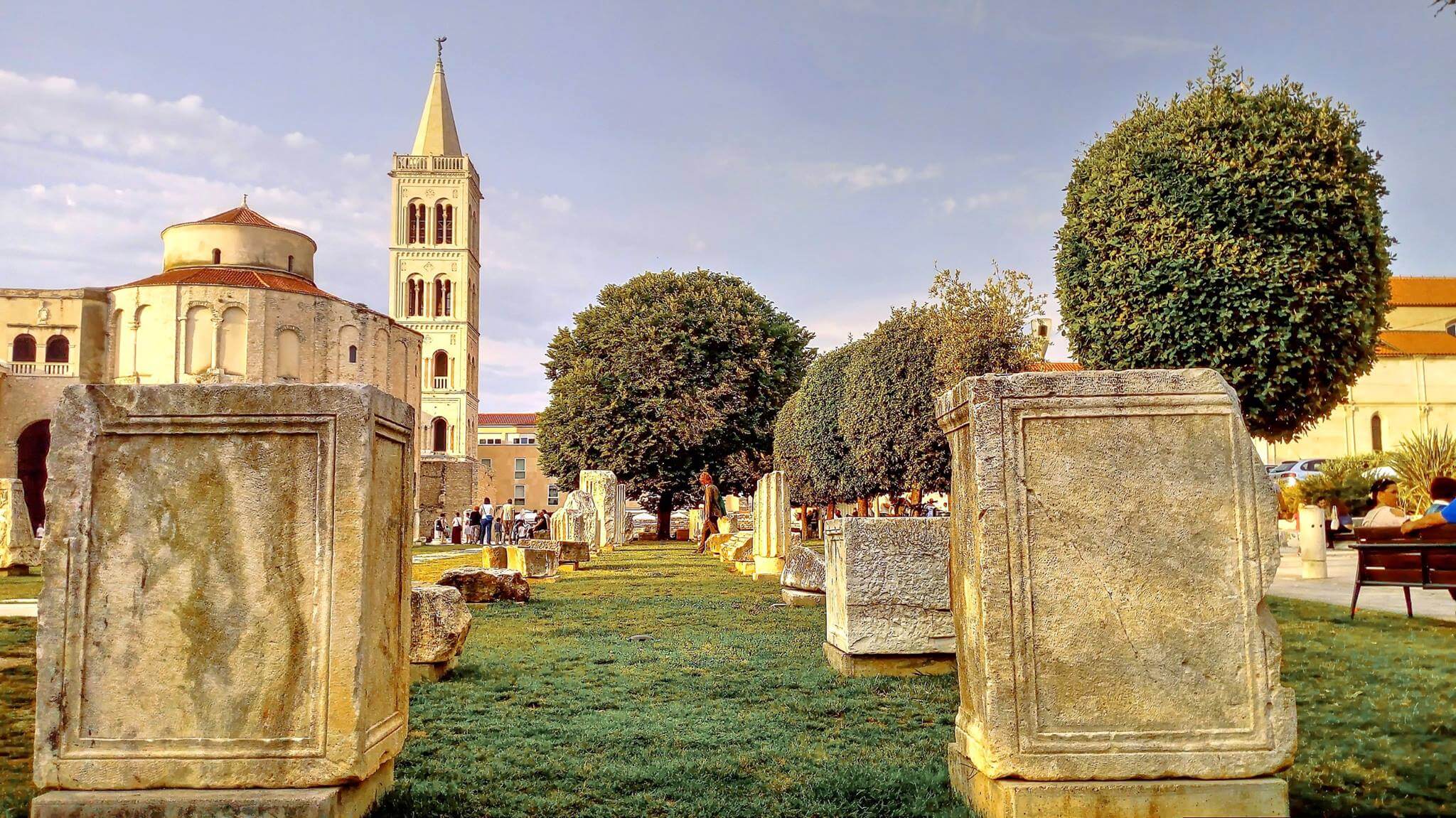 This church dates back to the 5th century and has received booth gothic and baroque influences. What makes it special is that it contains a shrine of St Simeon chest. This shrine dates back to 1377 and is displayed for the visitors to see it. The architecture is also very nice, so even if you are not a believer, you may enjoy the visite.

This cathedral, the largest one in Dalmatia, was built during the 12th century. It has a very distinctive Romanesque style. The site has been submitted to UNESCO's Tentative List of World Heritage Sites. 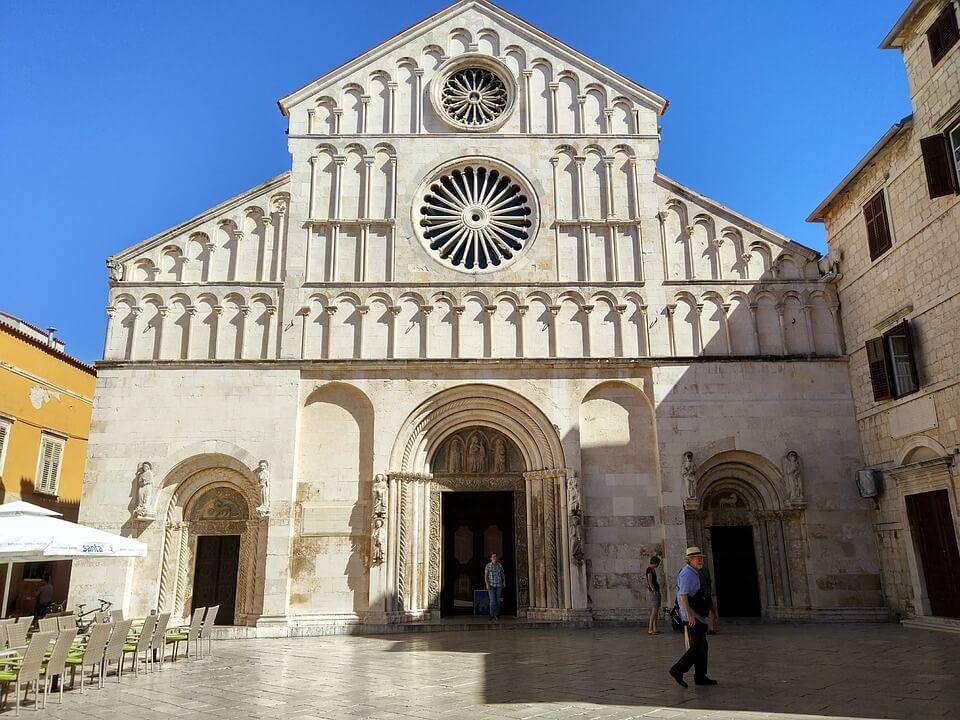 ACCOMMODATION AND TRANSPORT IN ZADAR

It is easy to get to Zadar as there is an airport; which is located 8km away from the city. You can go there with the cab or with the bus, but we advise you to take the bus as it is not very long and way cheaper (by bus you will pay 25kn for a one-way ticket whereas by cab it will be approximately 120kn).  As well you can hire a car at Autowill rent a car Zadar airport. You can get to Zadar by plane from many European airports, including with low costs companies. You can also join Zadar from many Croatian cities by train or bus or even from Italy by boat. Be aware that there aren’t any international flights to Zadar during winter. If you are looking for a pefect accommodation check for luxury villas in Zadar. 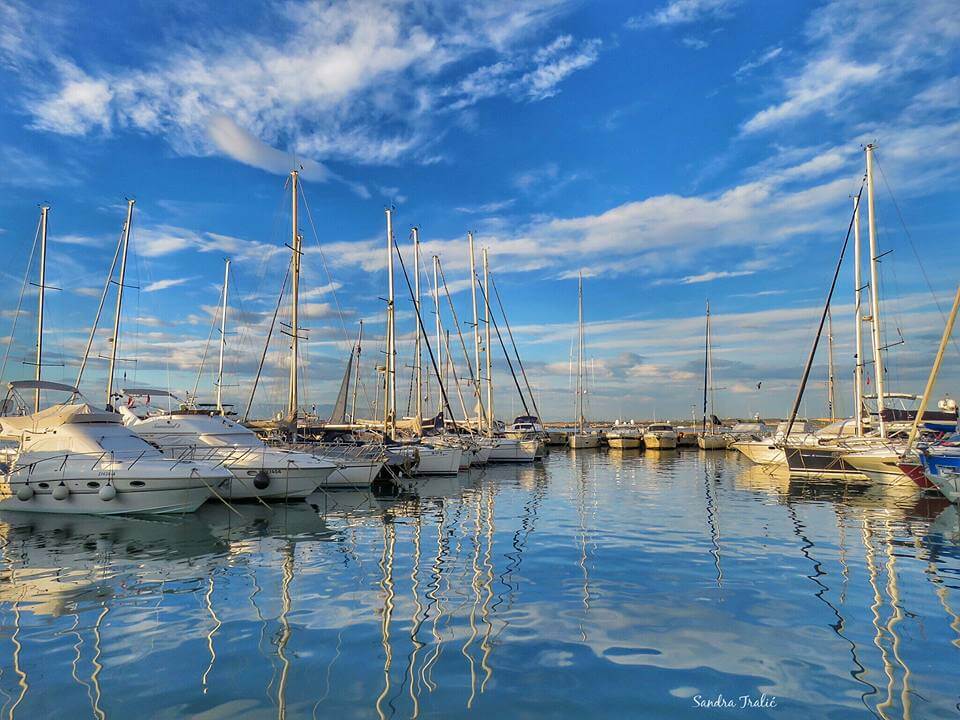 WHAT TO DO IN ZADAR

For a typical day in Zadar, start by heading to the forum in order to take a morning coffee. This way, you will be able to enjoy the morning light while enjoying a hot drink; not forgetting, above all, to take pictures of this beautiful place full of Roman vestiges. Taking coffee out in the morning is a typical Croatian attitude, trust us!
While you're in the neighbourhood, take a look at the St Donatus church, and if you are a history enthusiast, make sure to visit the inside of the church because it has a very particular atmosphere. Make sure to check the St Anastasia cathedral too, which is amazingly beautiful.
If you feel like it, you can head to one of Zadar's museums. According to your preferences, you can choose one of them. There is a museum of ancient glass, containing odd yet interesting glass pieces. You can find out about history thanks to the glass items according to the different ages. If you prefer a more classical museum you can go to the archaeological museum as well. It has an extraordinary collection of mostly Roman artefacts spread over 3 floors. A true crush for history lovers! Finally, if you prefer a more uncommon museum, we can recommend the museum of illusions. If you have children, it could be a good alternative because the museum is interactive and very amusing, they won't be bored! And neither will you as it is always fun to see our reality challenged.

At this time, you may be hungry so you could go to the Siroka street as there are many bars and restaurants and the street is located in the middle of the peninsula. 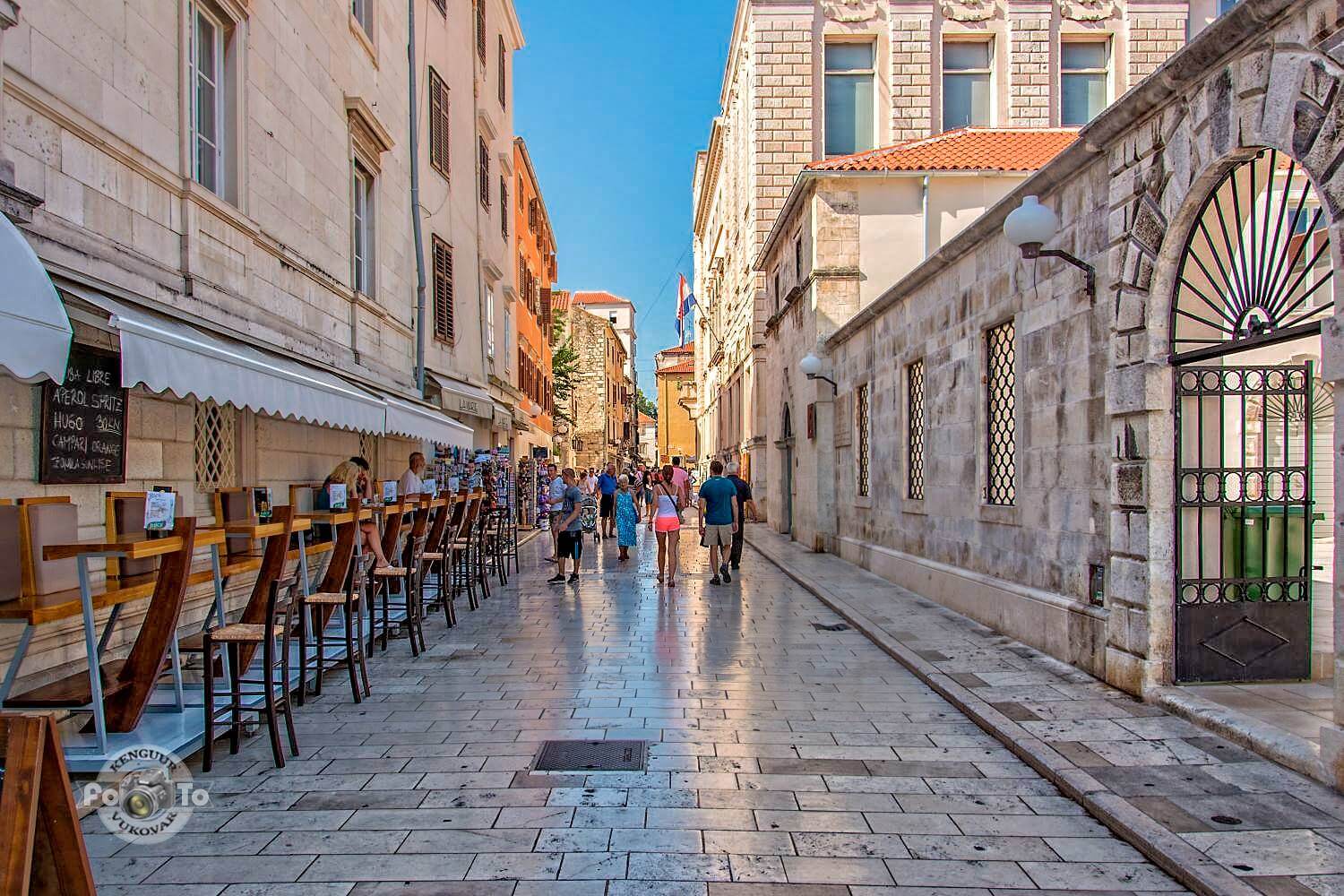 After your lunch and with the hot weather, you may want to take a dip, you can thus go take the boat to go to the Ugljan island, where Muline beach is located; which is probably the most beautiful beach in the surroundings with its turquoise sea and its distinctive rocks on the sand. And honestly, what is better than drying up on the sun, laying on your towel after a long day of walk and discovery? Of course, as the sun is very forceful in Croatia don’t forget to put suncream on, don’t stay in the sun for too long, drink water regularly, especially for the children. You can go directly from Zadar and the cost is between 15kn and 18kn. You can spend your afternoon on the beach and discover a little bit this amazing island.

Then, make sure to be back in Zadar before the sunset because you don’t want to miss it, after all, it is said to be the most beautiful sunset in the world! The best place for you to see it is by the sea organ. Once you have admired it, make sure to have a look at the greetings to the sun display, because it starts shining by the beginning of the sunset. Look at all those beautiful lights while listening to the wonderful music of the sea. 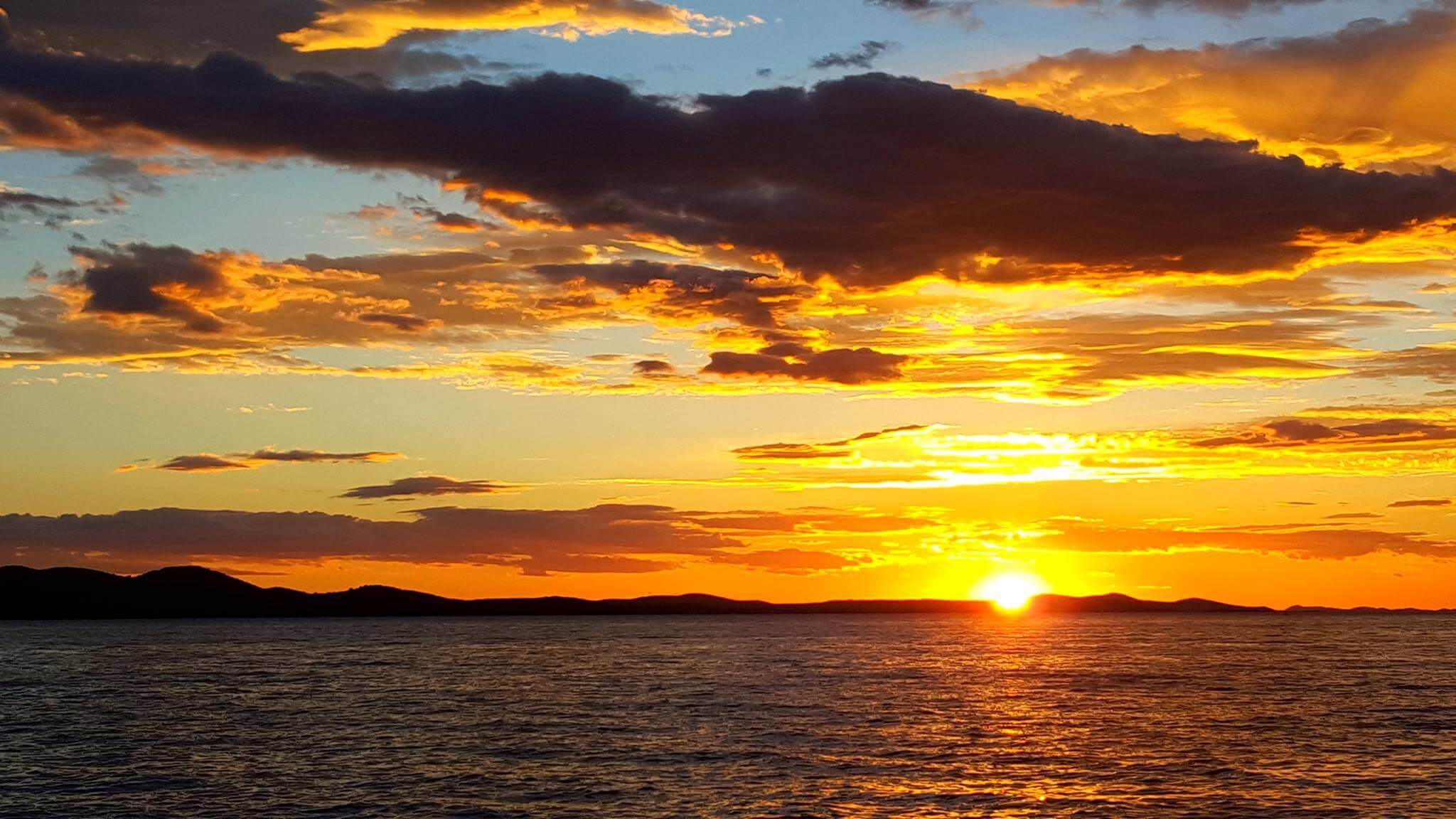