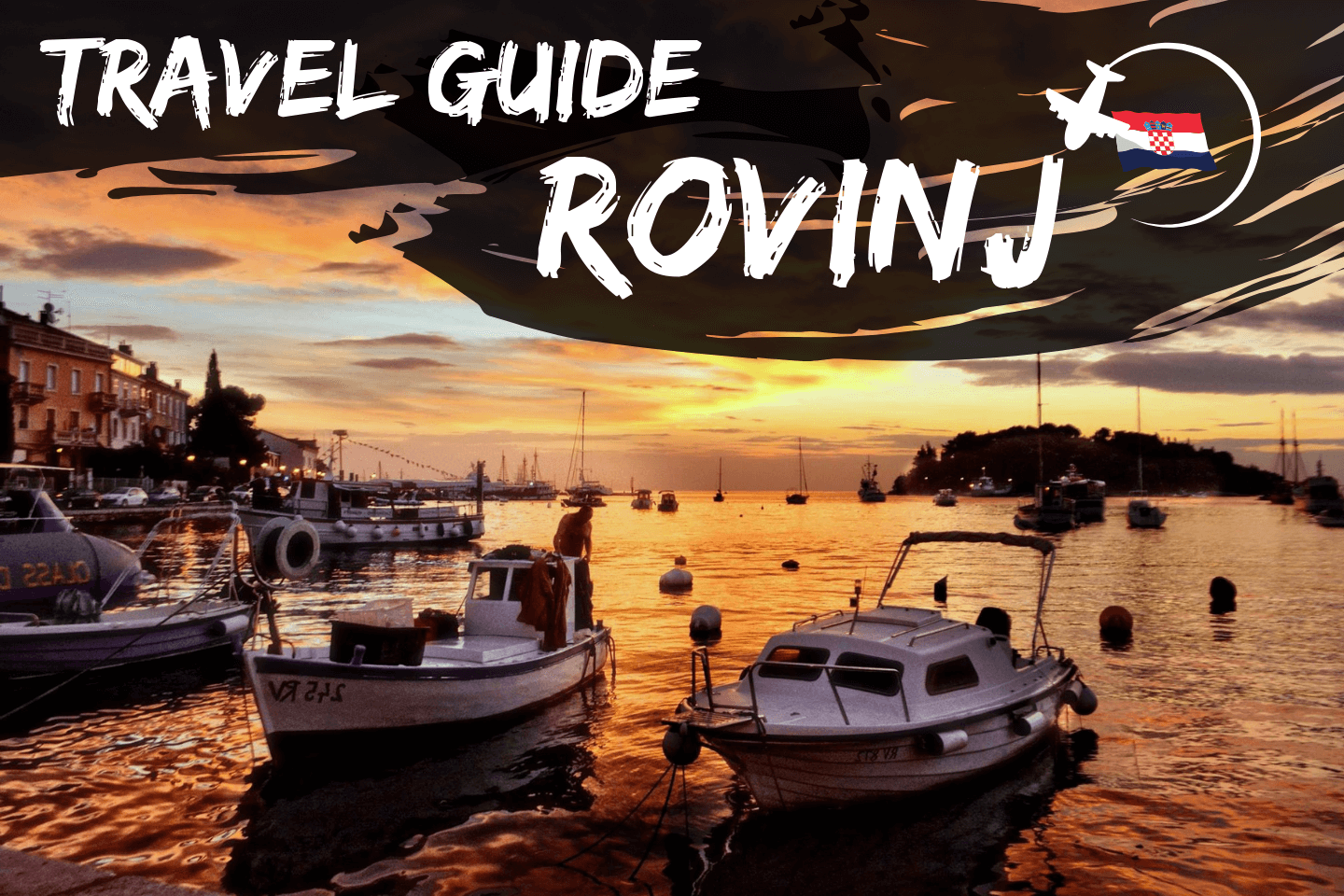 Rovinj surroundings, according to archaeological findings, were inhabited in the prehistoric period - the Bronze and Iron Ages, when the culture of the Histrian tribe who lived in Istria and traded with the Greeks and Etruscans was at its peak. After a peaceful reign of the Roman Empire, while running away from incursions of the Visigoths, Huns, Goths and Byzantines, the ancient Romans in search of safety inhabited the islands of Mons Albanus, St. Catherine, St. Andrew and Cissa.

Castrum Rubini, located where today the Church of St. Euphemia is standing, formerly the Church of St. George, became Ruigno, Ruginio, Ruvigno and survived devastating attacks from land and sea: the Slavs, the Narentines and the Saracens. After the period of Byzantine rule, Rovinj first fell under the Longboards and subsequently passed under the rule of the Franks. During the 10th and 11th centuries, Istria was ruled by the powerful feudal families of Germany who looked favourably on the political and economic empowerment of Venice. In 1188 Rovinj signed a contract with Dubrovnik (Renovatio Pacis) in which both sides committed to trade and exchange goods. In 1283 began the long period of Venetian rule. Venice fought with Genoa, who in 1379 devastated and conquered Rovinj. The Genovese even took the bones of the town patron from the sarcophagus, but they returned them in 1401.

The Middle Ages brought another great misfortune - the plague. Rovinj, however, was partly spared due to its favourable climate. Coastal parts of Istria were settled by the refugees running away from Turkish incursions from central Istria, Bosnia, Dalmatia, and even from Greece and Albania, and the population of Rovinj grew rapidly. Hence the typical architecture of the old town centre: houses rose high, close to one another, leaning against the town walls. In 1650, as the risk of Uskok attacks decreased, the town expanded to the areas outside the town walls on the island, as well as opposed to it, on the land by the slope where the Franciscan monastery was located.

In 19th century Austrians are once again on power and Rovinj got street-lights, the old school, a steam mill for pasta production, the Commerce-Crafts Chamber for Istria was founded, lighthouse on the island of St. John was built, a theatre, cement production facility, tobacco, wax, glass and sardine factory, hospital, Institute of marine biology, and soon Rovinj was connected by a railway line. In the 20th century town gas lights and town telephone were introduced. After the break-up of the Austro-Hungarian monarchy Rovinj came under the Italian rule which lasted until the capitulation of Italy in September 1943, and by the end of the World War II the town remained under German occupation. According to the Paris Peace Treaty from 1947 Rovinj was incorporated, along with other Istrian towns and islands of Kvarner, into Croatia within the Yugoslav state. In 1990 began the struggle for independence and separation from the communist Yugoslavia.

When in Rovinj, there are dozen of things you should do and places you should visit. The old town has limited space that conditioned the construction of narrow houses, narrow streets and small squares. The characteristically built chimneys are a special feature of the old city as well. Thanks to the above-mentioned special features, the old town was proclaimed a monument of culture in 1963.  The City Palace is the seat of the City mayor and the entire city administration, once this was the Praetorian Palace whose "foundations" date back to 1308. In the immediate vicinity of the City Palace is situated the Center for Historical Research which disposes with a large library with more than 80 000 works.

The Antonio Gandusio Theater deserves to be called a true attraction of both Rovinj and the Croatian cultural heritage. Built in Baroque style, perfectly fits the environment and its interior is quite simply beautiful. Franciscan Monastery has also been built in Baroque style, it has a library which stores a collection of about twelve thousand books. The monastery also has a monastery collection of over 250 exhibits representing various and diverse evidence of human creativity, knowledge and achievement, mainly of theological content, some of which date from the 16th, 17th and 18th centuries and are true rarities (for example  Herbarium from 1756, Reliquary of the Holy Cross and the Torture Pole from the 18th century, Icon of the Holy Mary and Child from the 16th century).On the main town square is located the Town Clock which once represented the tower on the south corner of the former town walls. The city had seven gates in the past, three of which have been preserved to this day - the Gate of St. Benedict, the Portica and the Gate of the Holy Cross. You have to see the Balbi’s Arch, on its place used to be the main gate to the fortified city of Porton della Pescheria.

To reach the top of the hill, where is the church St. Eufemia, you have to climb up through tiny streets. This Venetian Baroque building and the largest monument in the city was restored between 1725 and 1736. The large copper statue of St. Euphemia, by the Vallani brothers from Maniago, was set up at the top of the bell tower in 1758 where a wooden statue destroyed by thunder in 1756 used to be. The statue was fixed so that it turns on its bearings around its axis by the strength of wind. It was restored thoroughly in 1834 after being severely damaged by thunder. One of the streets you have to walk through to reach this church is called Grisia. In Grisia Street every year in August there is an open-air art exhibition and if you like something you can buy it. These streets are full of ateliers, shops and galleries. 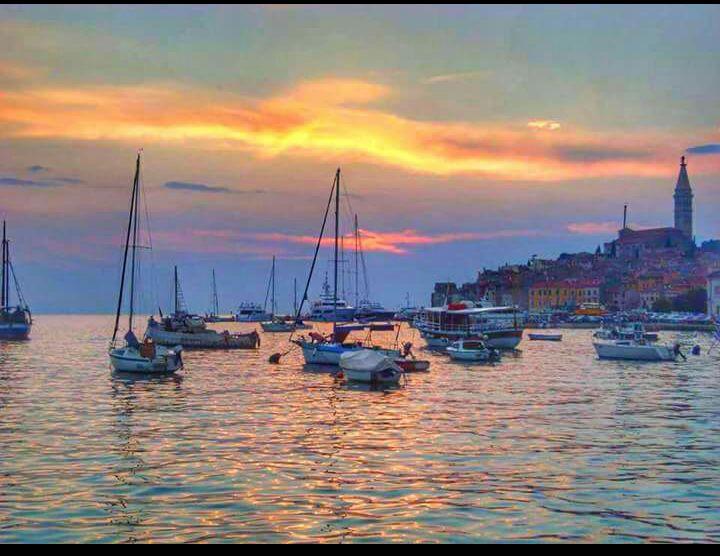 The most important and best preserved Romanesque building is Romanesque Church of the Holy Trinity. It is located at Trg na lokvi, near the Bus Station. A true authentic architecture pearl is the beautifully preserved Early Romanesque transenna presenting Golgotha and the images of the Holy Mary, Mary Magdalene, St. Peter, St. John the Baptist and St. John the Evangelist. This church has been turned into a gallery. There are several other churches in Rovinj which are worth to see - Church of Our Mother of Mercy located in Carducci Street, Church of St. Benedict located at the small square Pod lukovima, Church of the Holy Cross located in Holy Cross Street,  Chapel of St. Thomas the Apostle, Chapel of the Lady of Health situated on the left side at the end of Švalba Street, Church of St. Bartholomew located by the edge of a plain beneath Valalta Bay, Church of St. Christopher, Church of St. Thomas located 4 km from Rovinj, right next to the old Rovinj-Kanfanar railroad and Church of St. Damien located halfway between Palud Wetlands and St. Damien’s Cape. 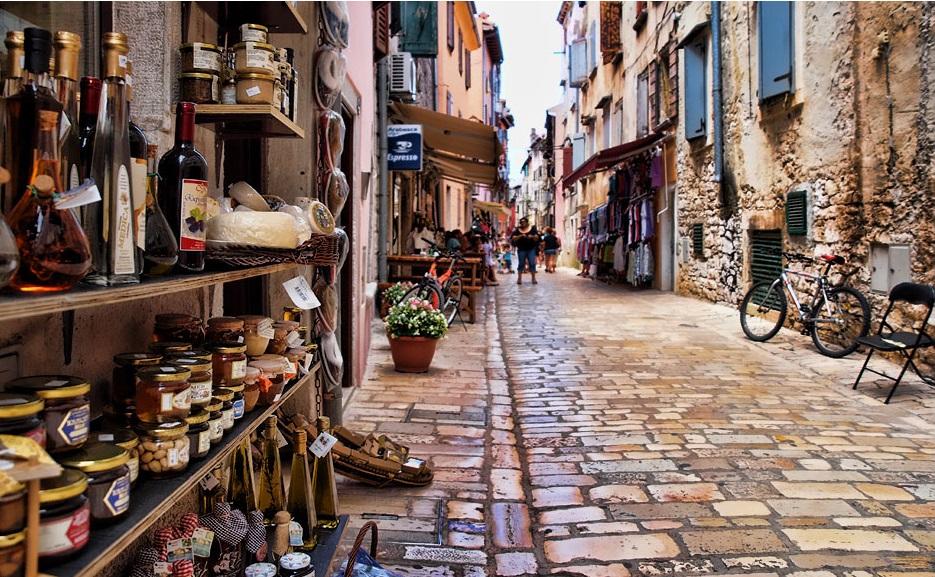 ACCOMMODATION AND TRANSPORT IN ROVINJ

If you’re coming to visit Rovinj by bus, the main bus station is situated in the very centre of Rovinj. Near the bus station, there’s a taxi station which is pretty expensive. There’s no public transport since the town is really small and you can walk all over it.

The nearest airport is situated near Pula, 38 km from Rovinj. There are many bus lines from Pula to Rovinj, almost every hour. It takes only 40 minutes by bus to reach Rovinj. If you’re coming by train, the nearest train station is located 15 minutes by car. You take off on the “Kanfanar” station, but the busses don’t go so often and taking the taxi is an expensive idea. 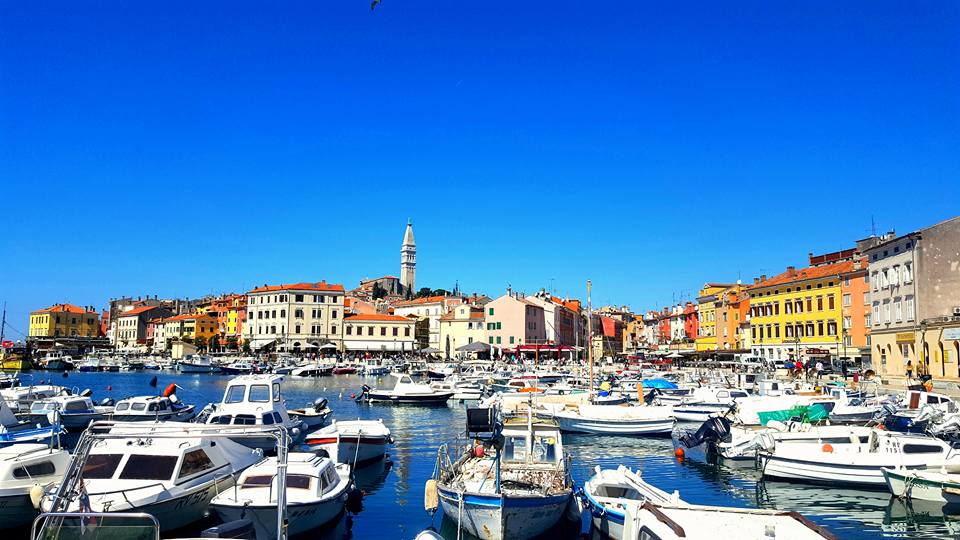 The port of Rovinj is connected to Venice and the Emilia-Romagna region, Italy. During the summer months, there are passengers-only sailings almost every day. Rijeka Ferry Port, located 91 km from Rovinj, is connected to the islands of Kvarner and Dalmatia by ferries.

WHAT TO DO IN ROVINJ

The best period to visit Rovinj is during summer. Natural Park called Punta Corrente is a place where you can go and spend your whole day on a beach, cycling, jogging or just relaxing. It is a big green area where cars are not allowed to enter.

There are numerous beautiful pebbly beaches. There’s a beach called “Balsamache” which has a view on Red Island, which is also definitely worth visiting. The boat to the island goes every hour from the port on the main square, but also from the port called “Delfin”. Red island is connected to another island which is called Maškin. Maškin is FKK island, but you can still take a walk with your clothes on. The quality of the water in Rovinj beaches is top class, so enjoy it! During summer there are many manifestations organized exactly for tourists. Almost every night on the main square there’s live music where you can dance and have fun. Big variety of restaurants gives you an opportunity to taste typical Istrian cuisine or some seafood. When it comes to festivals, there are many interesting festivals. If you’re a photography lover, there’s a PhotoDays Festival. 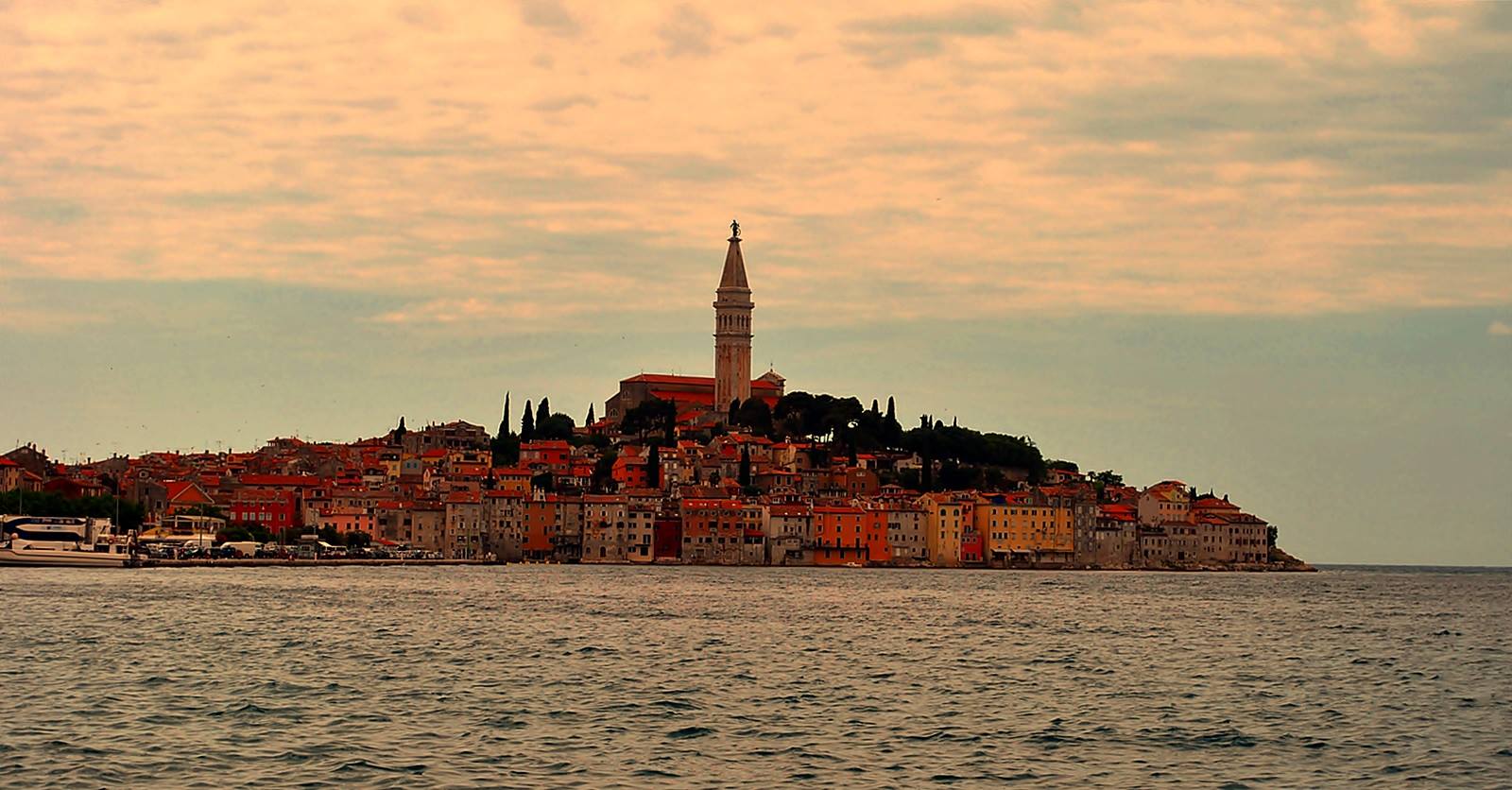 If you are a jazz lover, there’s Rovinj Spring Jazz Festival for you. If you like Latino dance, there’s Sensual Days festival. Everyone can find something for himself in Rovinj. The main street called Carrera is full of shops, the waterfront (riva) is full of restaurants, pubs and coffee bars, and the old town, situated on a small hill, is full of stone stairs and photogenic little houses and its windows which make Rovinj an interesting city. If you’re coming by car or even a motorcycle, take one day to visit the heart of Istria. Cities like Motovun, Grožnjan and the smallest city on the world will take your breath away. 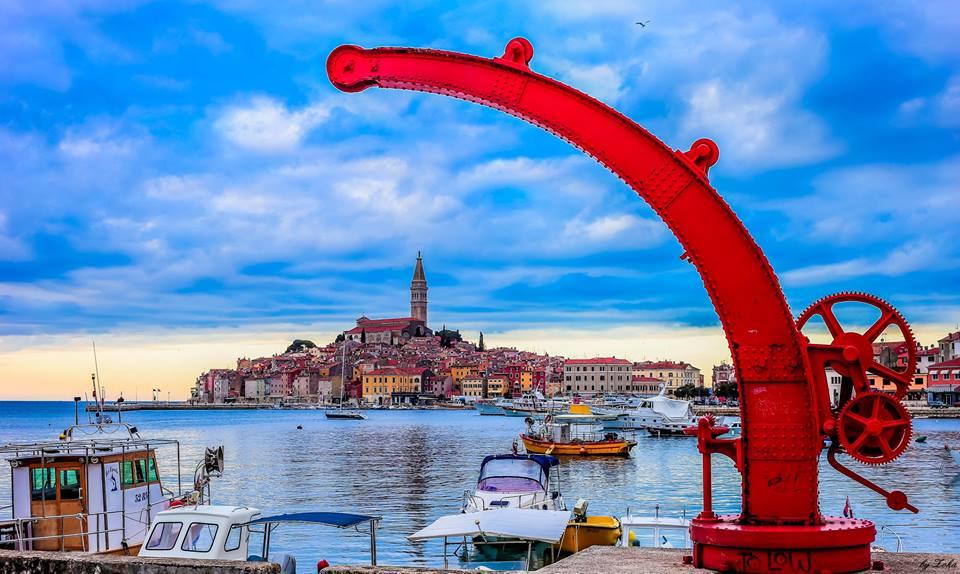