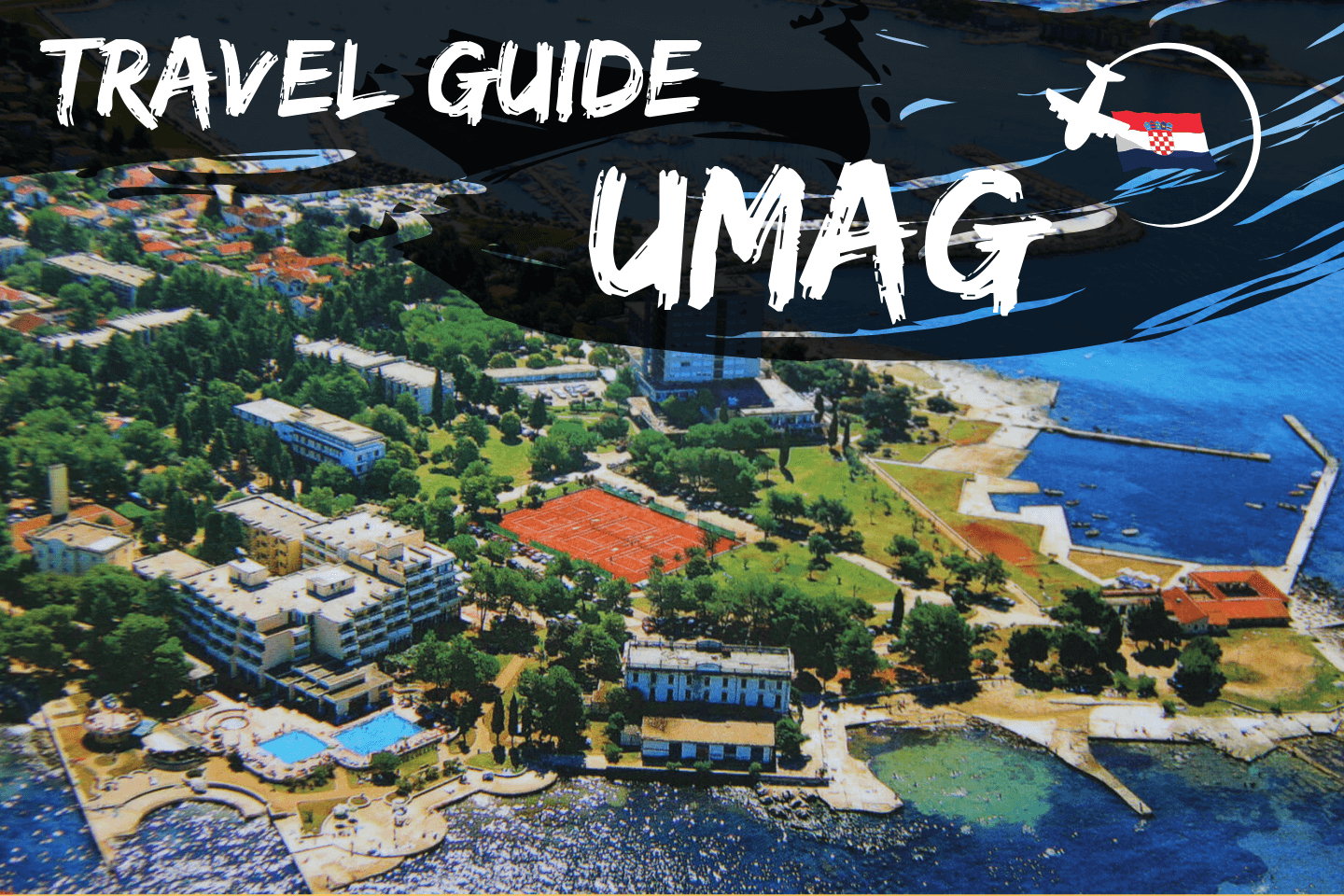 Umag is a city dating back to Antiquity, with a lot of ancient reliefs from several different ages.

Umag was first mentioned during the seventh century, by an anonymous citizen of Ravenna, although it already existed in Roman times. We can affirm that by the presence of Roman remains in the whole town and along the coast, such as Villa Rustica.
6 km-North from Umag lies the ruins of the Sipar settlement that was devastated by the Pirates of the Neretva while they were invading it, during the 9th century.
After this episode, the city was saved from invasions for several centuries thanks to its strategic location: a tiny island separated from the mainland by a narrow canal (it is nowadays not an island anymore).

Even though Roman times were marked by prosperity and safety, it didn’t last for long. After the end of the Roman reign, the city becomes insecure and is often invaded, affected by many severe diseases, such as malaria, cholera or even plague, causing a lessening of its inhabitants.
Umag gets under the influence of the Lombards and becomes thus part of the Odoacer Kingdom in 751. In 774, the Franks seize power and takes influence on Umag. As of this time, the city is quite insecure and has to go through several government changes.
In 1269, Umag promises fidelity to Venice, after Italy took power on Istria. It will remain this way until 1797.

There were several clashes during those centuries, causing destruction, including the destruction of the city’s archive in 1370 after the Genoese Navy attack.
Due to the plague epidemics that killed a great part of the population, Venice had to take the responsibility to incorporate new settlers to the colony, mostly coming from areas threatened by Turkish invasions. During the Venetian age, Umag only relied on agriculture to ensure its economic prosperity. It also allowed the countryland surroundings to exchange its goods with other cities thanks to its port.

With the Republic of Venice’s fall, Umag, as well as the entire eastern coast of the Adriatic, passed under the rule of France. It remained French before passing under Austrian influence until 1818. After the end of World War I, Istria became Italian. One of the consequences of the Second World War was the creation of the Free Territory of Trieste, while Umag was attached to Zone B, controlled by the Yugoslav Army, and then to Yugoslavia in 1954. The result was the exodus of many Italians. 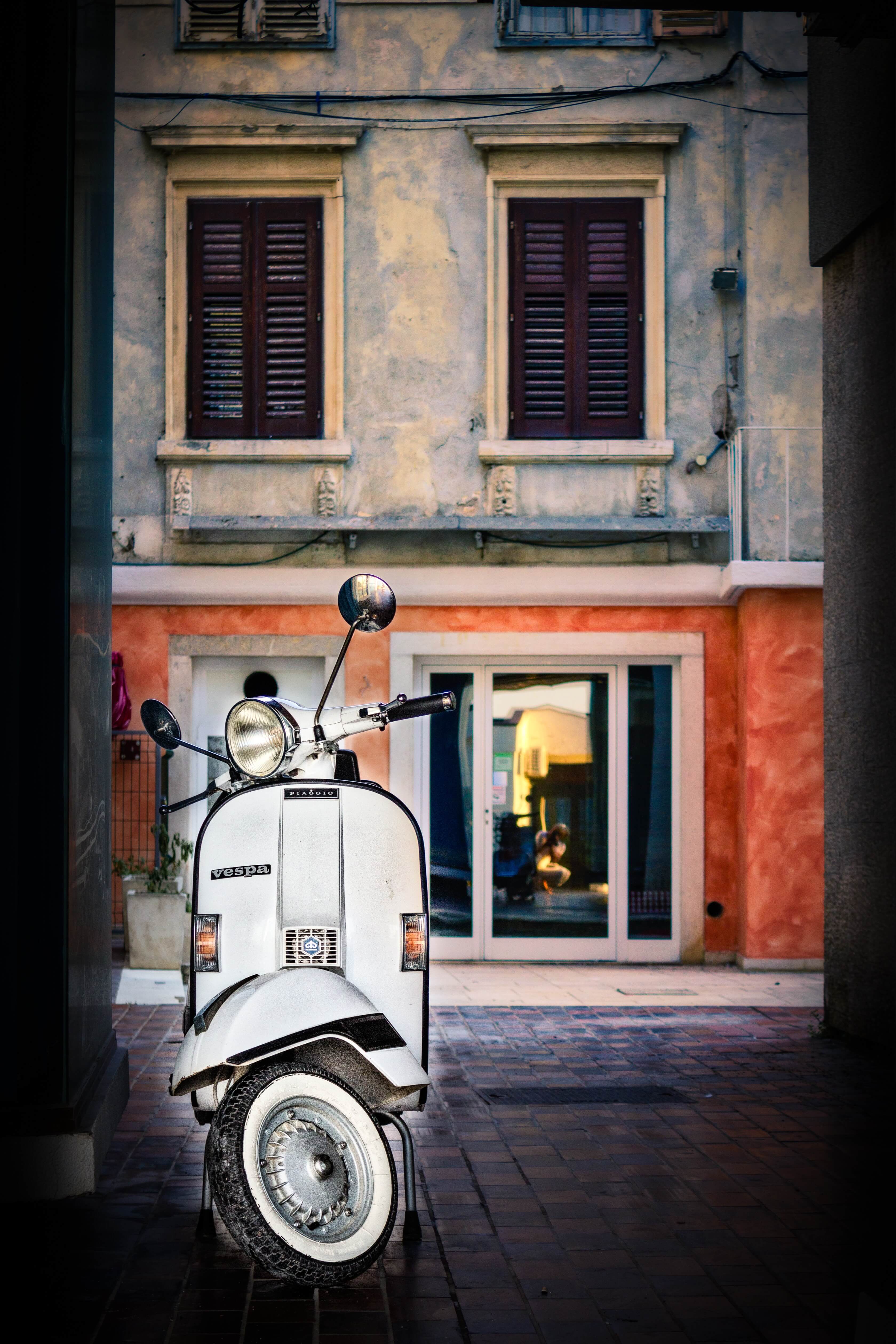 Church of St Roche: This church was built in 1507 after the plague epidemics, and owns a wooden ceiling painted by oil during the 18th century.

Umag town museum: it was one of the defence towers during battles, it is located near the town walls. Archaeological remains from Roman times are kept there. There is also a shop where you can buy copies of the reliefs, to always keep souvenirs of Istria.

Umag town walls / gated bridge: built during the 10th century, those town walls used to protect the city. Now they are one of the most famous sights of Umag, for their historical dimension and their white stones giving a very Mediterranean look.

The parish church of The Assumption of Virgin Mary and St. Peregrine: Built in 1402 by Filippo Dongeti, this church still remains unfinished but is very interesting to see though. St Peregrine was the Patron Saint of Umag that endured martyrdom. Inside the church, you can see a bas-relief depicting St Peregrine, as well as a fresco painted on the ceiling, statues of St Nicefor, St Peregrine and Virgin Mary of the Sorrows. The 33m-high bell tower dates back, for its part, to 1651.

Christian sarcophagus and houses: On the façade of Epifanio Street No. 3, there is an immured Christian sarcophagus dating back to the 5th century. On several houses, you can see holed-stone girders that are used to hang and show embroidered posters, which were used to protect the inside of the home from sunshine. You can as well find old Venetian mansions.

Cannonball: In the Garibaldi ulica, behind the Parish church, you can find a cannonball incrusted in the wall. According to historians, it was fired in 1810 by a Genovese ship.

TRANSPORT AND ACCOMMODATION IN UMAG

To go to Umag, you have several possibilities. If you are coming from far away (another country for example), you may have to take the plane. Umag is too small to have its own airport, but you can take the plane to Pula (86km), Trieste in Italy (52km) or even Rijeka (101km).
Once that you are landed, you can whether go to Umag by bus or by car, depending on if you rent a car or not. In both ways, it is not a very long way. You can as well use the taxi but it would cost you way more money so we wouldn’t recommend it.

As tourism is flourishing in Umag, you can find numerous great hotels for each budget, from the down-to-earth ones to the most luxurious ones.

WHAT TO DO IN UMAG

To start your day in Umag, you can start it with a coffee on a terrace, as every self-respecting Croatian day!
Once you are energised, you can go for a walk in the old streets of Umag to admire the distinctive architecture. It is the best time to do it because it the morning it is not too hot yet to string across the city. If you want to remember your trip, you can easily find nice souvenirs in the centre of Umag. Don’t forget to check the marina that is quite lovely!
Then, you can go to visit the two churches that are located really close to each other. You will have to walk a little bit (around 10 minutes from the centre but it is totally worth it). Spend some time there, soaking up the atmosphere and admiring all those beautiful features. 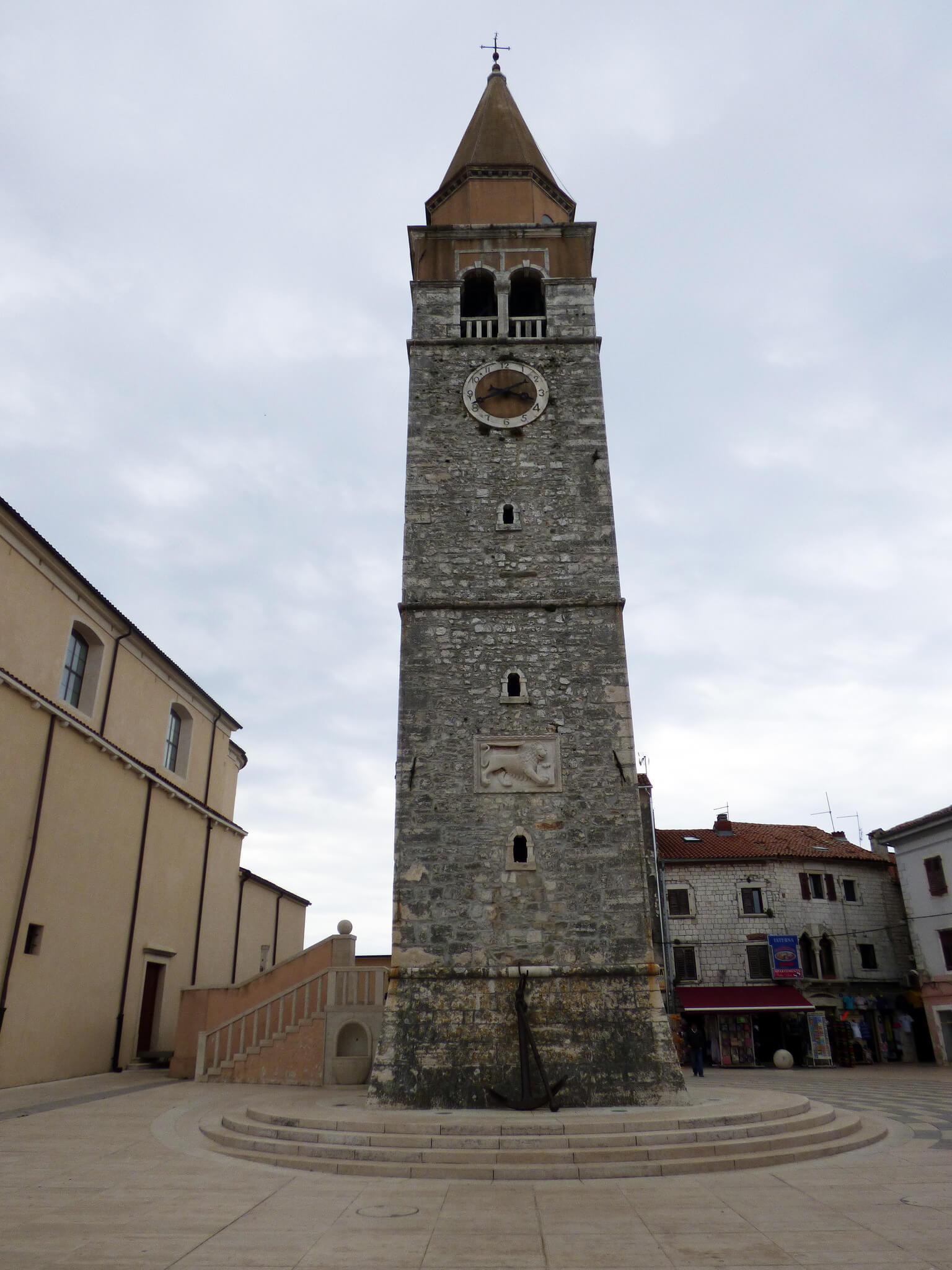 After visiting, you might get a little hungry, and we can’t blame you for that! You will easily find the perfect restaurant for you as Umag is overflowed with delicious restaurants, we let you choose for yourself according to what is appealing to you!
Begin your afternoon by visiting Umag’s town museum which offers a lot of interesting old remains from several different periods (this museum is free). Spend a little time here and when you are done admiring everything, take a look at the town’s walls that are quite interesting to see.
To end your day on a high note, you can walk (around 25 minutes) to one of Umag’s beaches (for example Lagune Stella Maris beach, Katoro beach, Aurora beach...) and spend the rest of the day there, it is better to go by the end of the day because it is less hot! 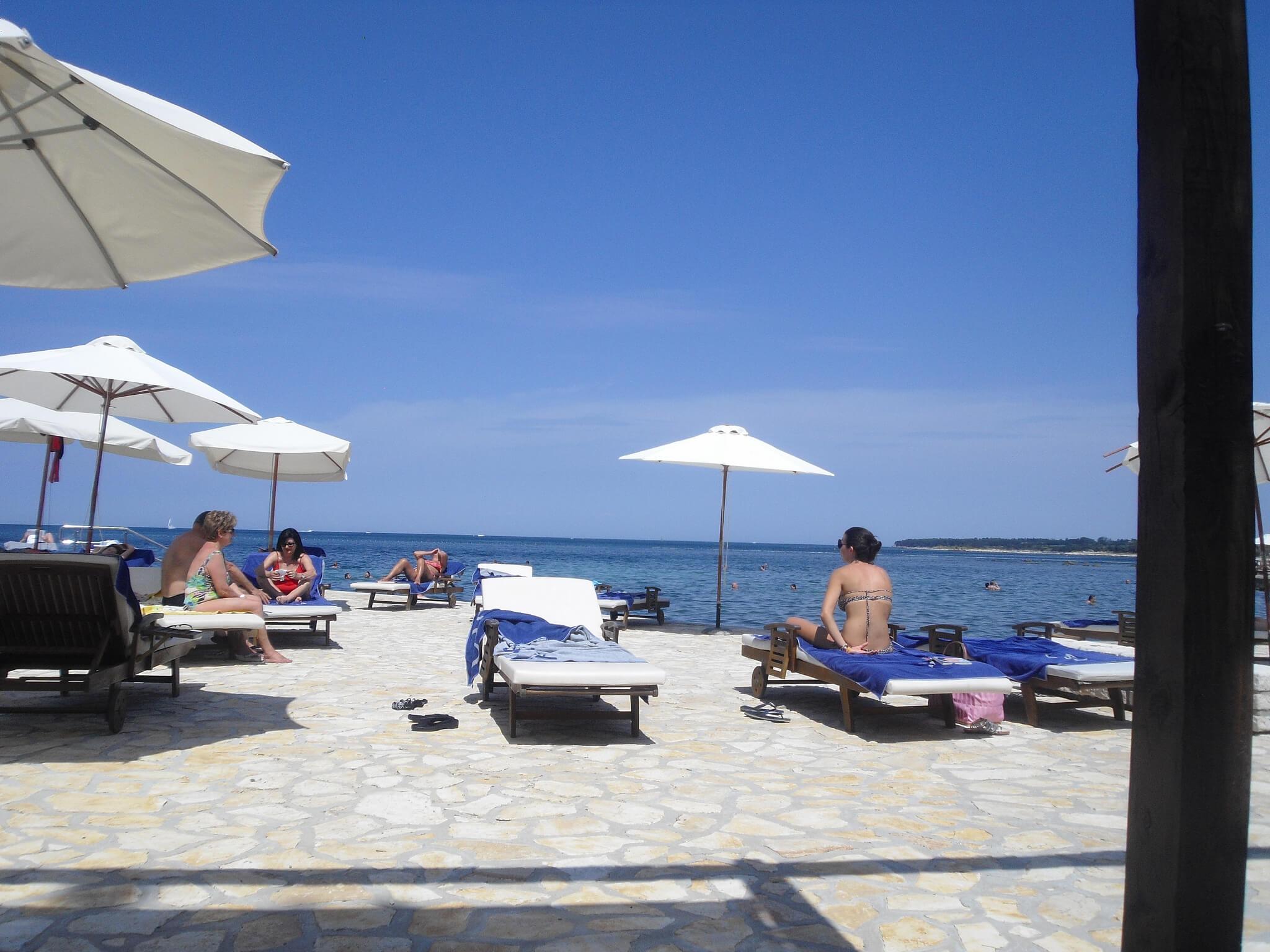 During the evening, you can eat in a little restaurant and walk through the city during the night, as the climate is mild and nice at this time.

If you are going there during July, there are big chances that you might be there during the Croatia Open, an ATP worldwide tournament taking place each year in Umag! It is really worth it as the atmosphere is crazy during the tournament and it is a good occasion to see a game. If you are going out, the nights will be great as well as people coming to see the ATP often go out!

Did you find something for yourself? Let us know in the comments section, below the article! Feel free to write a review as well!